Lucky for me, there were two national Korean holidays last Monday and Tuesday (Children's Day and Buddha's Birthday) that resulted in a lovely 4-day weekend.  Some friends and I decided to trek over to Tokyo, Japan (the biggest city in the world!) to take advantage of our time off.  Tokyo was about a 2.5 hour flight from Seoul, which was longer than I expected.  My friends' left on Thursday (because their schools were nicer than mine) so they left without me, so I flew alone and met up with them on Saturday.  Narita International Airport in Tokyo was about an hour and a half from the actual city, so after my flight, I had to catch the bus into Tokyo.  My phone doesn't work anywhere outside of Korea, and I was unable to pick up a wifi signal at the airport, so I had no way to contact my friends about what time to expect my bus to come in.  I was a little nervous, but luckily they tracked my flight and guessed (correctly) my arrival time, so they were waiting for me.  Once I got in, we called it a night because it was pretty late.  For the first couple nights, we stayed in an apartment that we rented.  It was small, but doable since we weren't going to be there too long.  The apartment we stayed in was in the Shinjuku area of Tokyo, which we discovered was also nicknamed "Korea Town" because of the large Korean population there.  This was totally by accident, as we didn't realize this when we had booked our accommodation.

On my first full day in Tokyo, I got to cross off quite a bit of stuff off my Tokyo to-do list.  First, we had to take the subway to  Akihabara.  As I have mentioned before, I'm a huge fan of the subway system.  I've used subways in multiple cities and it is by far the quickest, easiest and cheapest way to get around any major city.  Well Tokyo's subway definitely threw me for a loop.  Yes, it was cheap and quick, but definitely lacked on the "easy" part.  It was so confusing, because each different line is owned by a different company so it can make transferring from stop-to-stop a little tricky sometimes.  Luckily, my friends had kind of figured it out by the time I arrived so I just relied on them to lead the way! 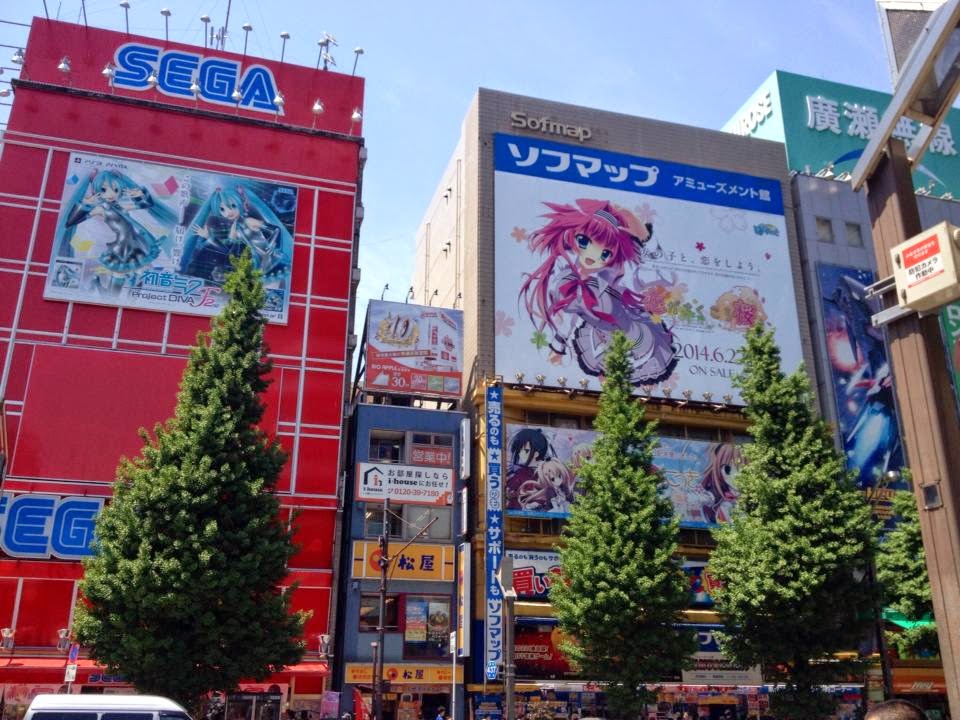 An example of the anime artwork on buildings.


After that adventure, we decided to check out the maid cafes which we had read about on a list of "Tokyo Must-Do's".  Basically, a maid cafe is a cafe that is decorated like a childhood girl's dream.  Lots of pastel colors and decorations.  All of the waitresses are "maids" and dress the part too.  They are required to talk in high, squeaky voices.  I believe these cafes were created for Japanese men, as they think the act the maids put on is cute, but now the cafes have become popular for tourists.  The cafe served a variety of food including alcoholic cocktails, ice-cream sundaes, pancakes, cake, etc.  All of the food was decorated in a cute way.  I got the "Roar, Roar" ice-cream sundae which included cookies and whipped cream to make it look like a bear.  I noticed another table ordered pancakes and the waitress was drawing faces on them with syrup.  At one point, the lights dimmed and a disco ball came on and one of the maids did a dance performance.  It was a fun experience, but unfortunately pictures were not allowed (only pics of food could be taken), so I don't have many digital memories of the cafe. 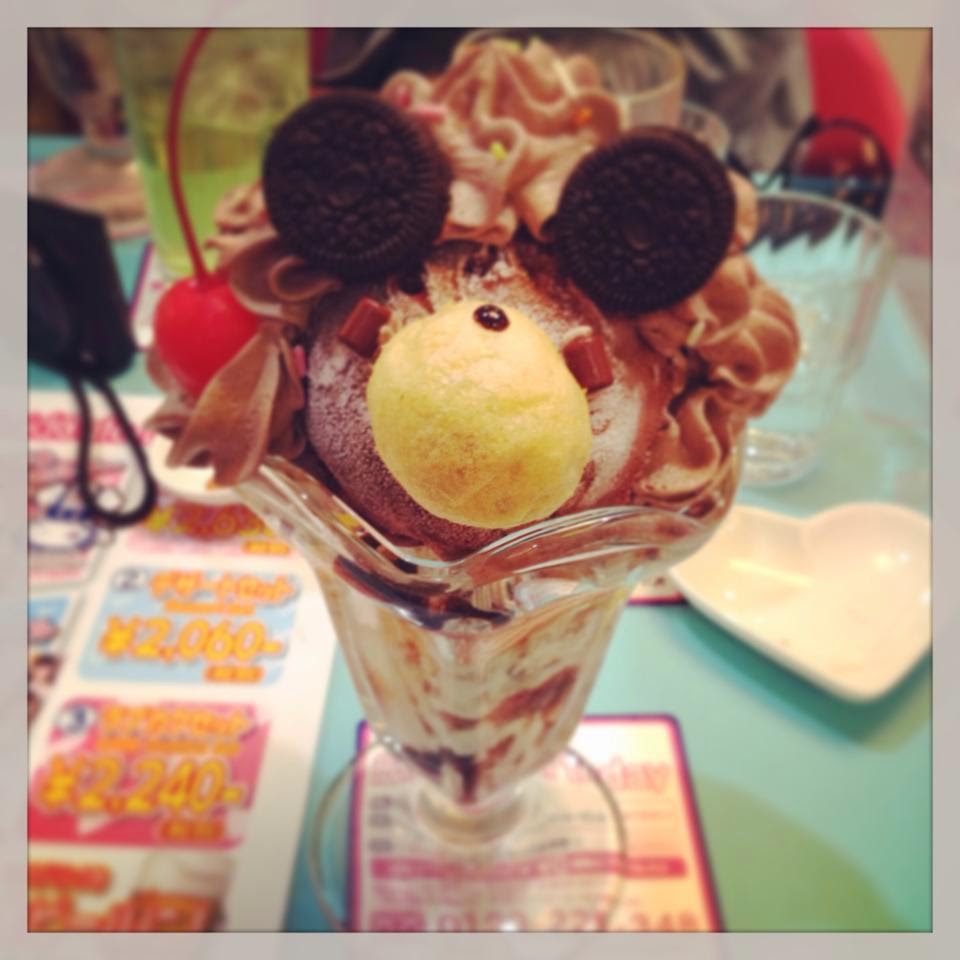 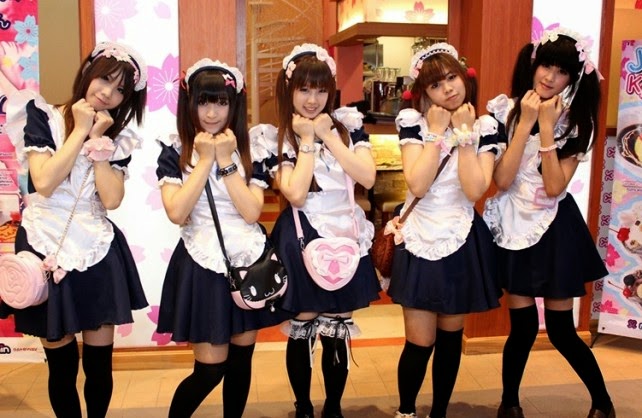 The maids at the Maid Cafe (not my picture, I found it online)


After we filled up on ice-cream sundaes at the maid cafe, we made our way to the infamous Shibuya Crossing, aka the "Times Square" of Japan.  It's a major intersection and when the "walk" light signals the go ahead for pedestrians, watch out!  There are hundreds of people crossing the street at once and it was very crowded.  This area also was a major shopping district with stores like Hermes, Gucci, Guess, and others. 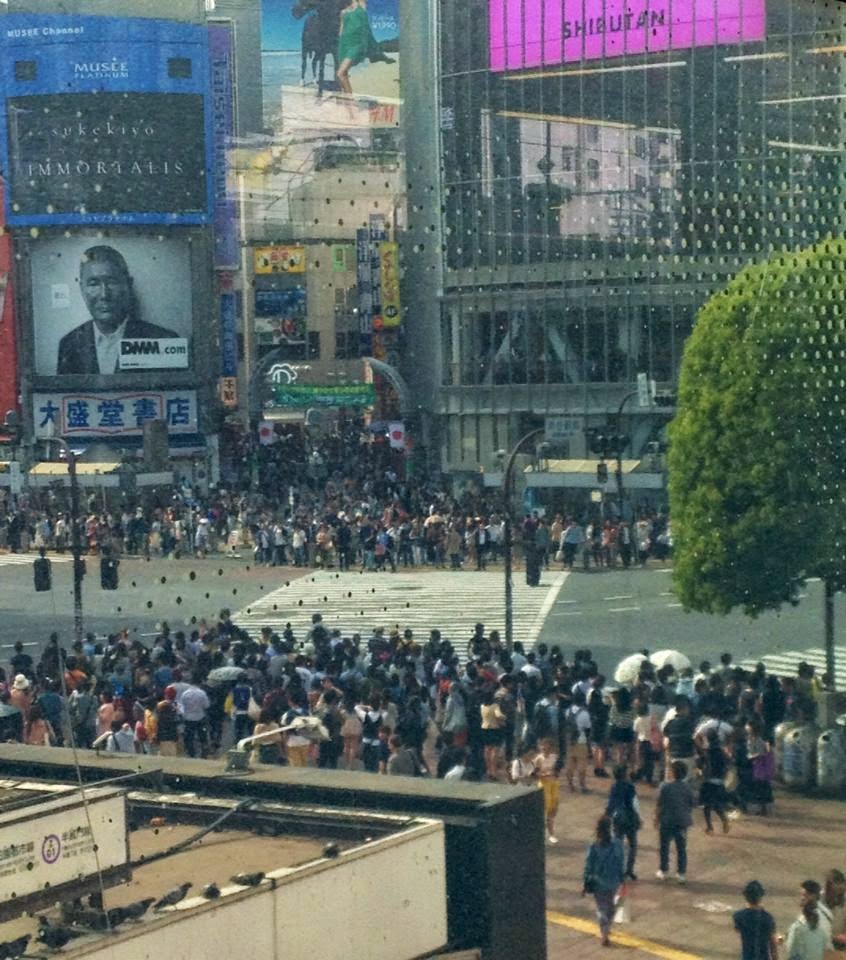 People waiting for the "Walk" signal 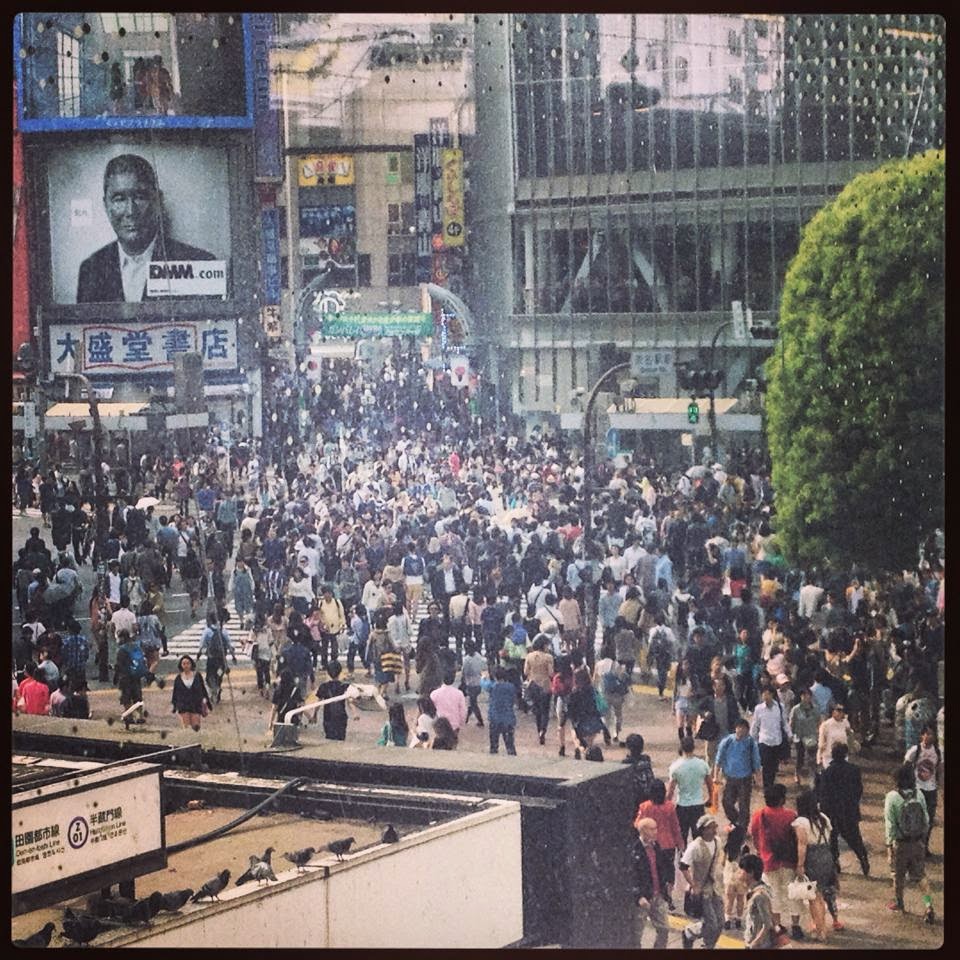 Crossing the street...so many people! 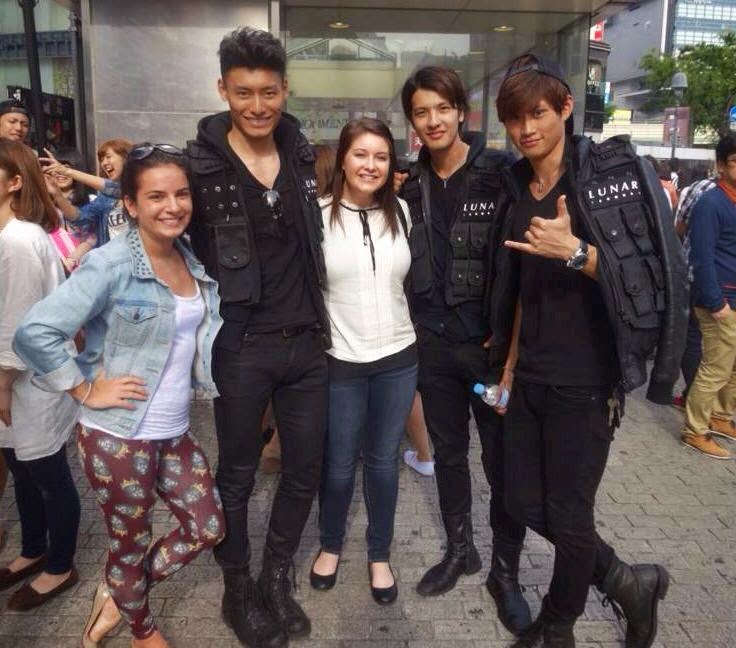 All the hotties must hang out in Shibuya


After eating Japanese curry (yes, curry! It's randomly popular there), we headed to the Roppongi District of Seoul which is supposed to be good for clubbing and night life.  We had asked around about good places to go out and were lead to Club Six.  It was pretty much all Japanese people, but we had fun dancing and drinking.  A group of Japanese girls came up to us on the dance floor and were practically our own personal fan club all night.  They didn't speak English but they loved us and our dance moves so much that they imitated almost everything we did!! We were definitely popular!  Two of my friends had to leave early, so Cara and I had to take a taxi home.  We weren't thrilled about taking a taxi because we had heard how expensive they were in Japan.  In Korea taxis are really cheap, so we were less than thrilled when we had to pay $30 for a 10 minute ride.  Boo you, Japan!!

At about 5am that night, my friends and I awoke to find our apartment shaking rather intensely.  I was pretty groggy and initially thought one of my friends was shaking the bed, but I was wrong.  We were experiencing a 6.0 EARTHQUAKE!  It lasted about 20 seconds, but it seemed longer than that because everything was shaking so bad.  We fell back asleep afterward, but when we woke up a few hours later we had remembered what happened and looked it up online to confirm that we hadn't made it up.  Sure enough, there had been an earthquake...actually, the biggest earthquake Japan has had since the 9.0 one in 2011.  I thought it was really cool to experience a real earthquake, since that is something you just cannot plan!

The next day we decided to press our luck at one of Japan's many casinos.  They were literally on every street corner.  Pachinko is the Japanese game of choice, but I opted for the good 'ole slot machines.  I thought I'd have a decent shot at winning some money because my friends had gone a few days before and won $170!  Unfortunately luck was not on my side, because I gambled my whole $10 and lost it all.  But it was fun! 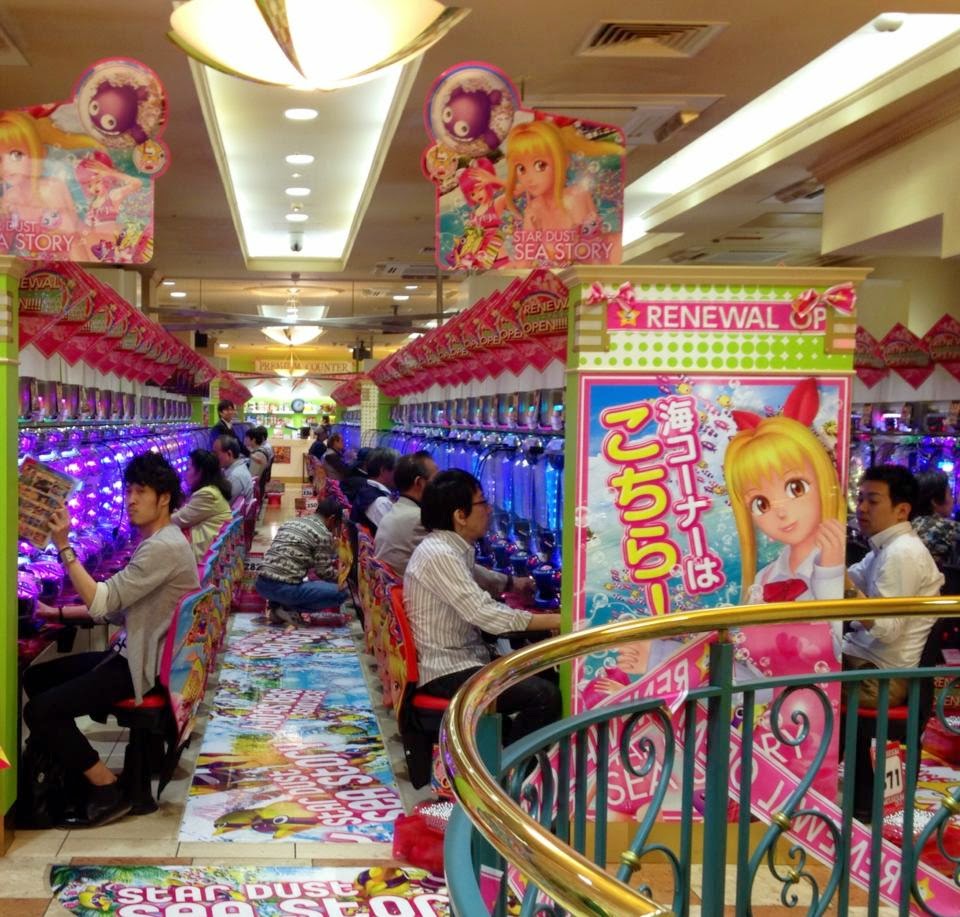 
One of the things I was most looking forward to doing in Japan was eating real sushi in the place that it had originated.  Well, we finally got our chance and ordered a few rolls.  It was good, but I think I'm too accustomed to American-style sushi, so I was a tad bit disappointed. 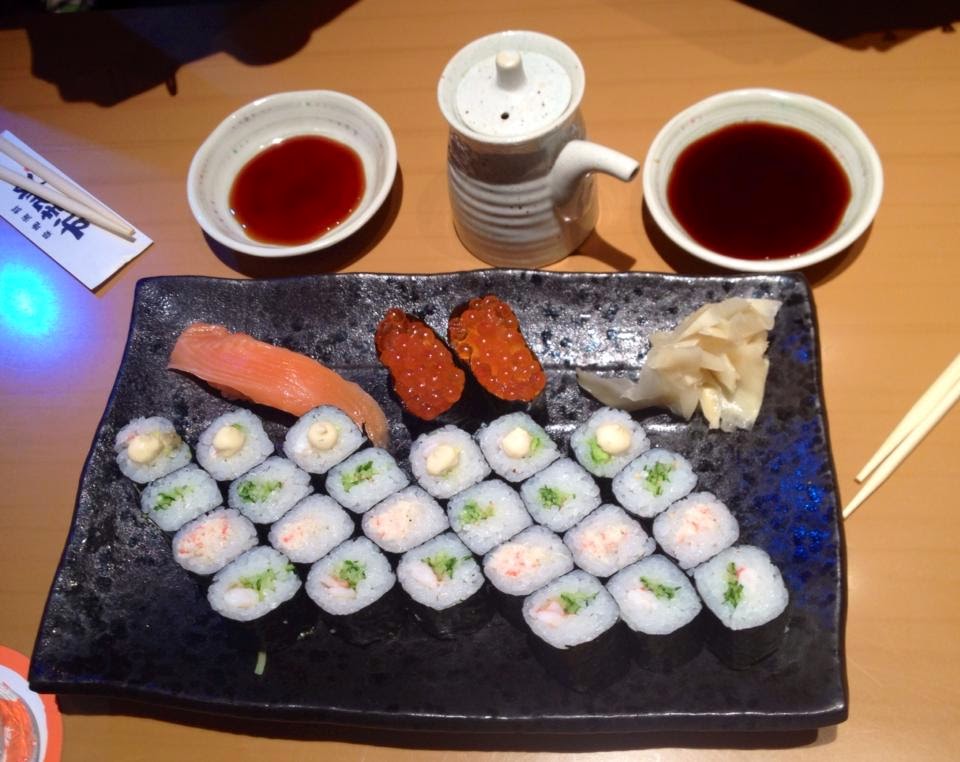 
That evening we decided to see the Robot Show, as it had gotten really good reviews.  It was about an hour and a half show of pure randomness!  The show featured dancing, drum playing, singing, and robots.  Real robots.  It is hard to explain because there wasn't much order or a single theme to the show, so I'll let the pictures do the explaining. 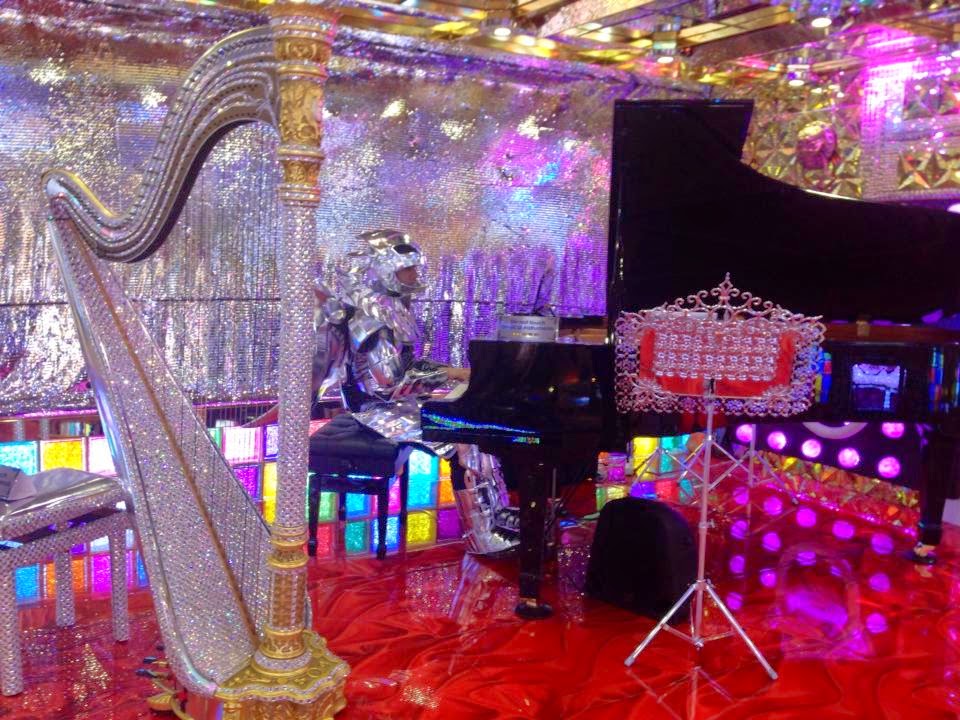 We waited in the Robot Lounge before the show started.  It was very elaborate!  I felt like I had stepped foot into Liberace's playground. 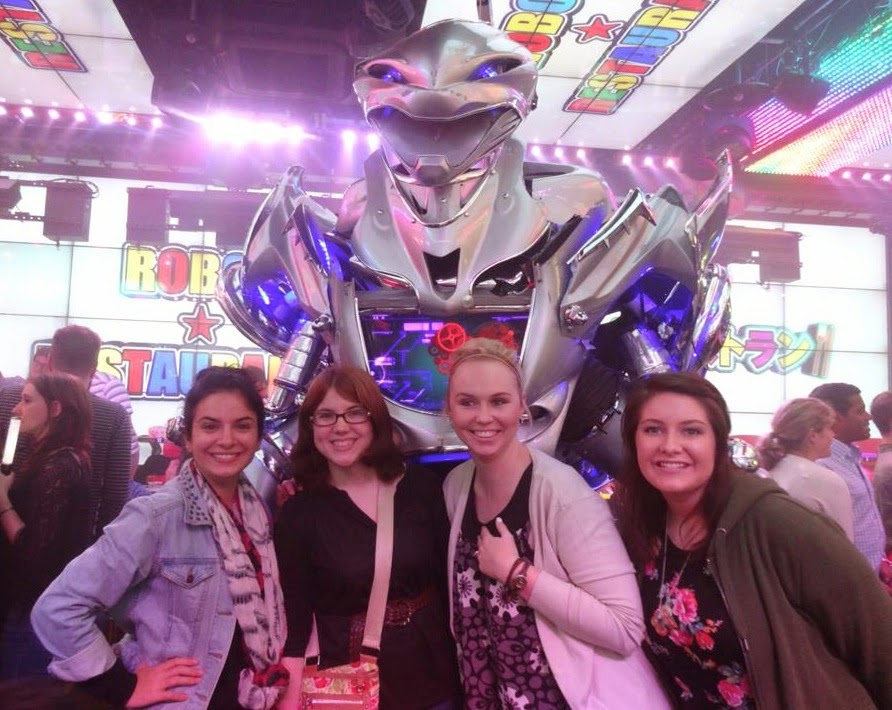 Posing with one of the robots.


After we had had our fill of robots, we headed to a Prison-themed Bar.  It actually turned out to be a Prison-Haunted House-themed bar.  We sat at a booth, which modeled a prison cell.  We ordered really cool drinks that came in science beakers.  At one point during our time there, the lights dimmed really low and scary music started playing.  Then, people in scary masks and Halloween costumes would occasionally walk by our cell and rattle the bars and open them.  It was kinda freaky! 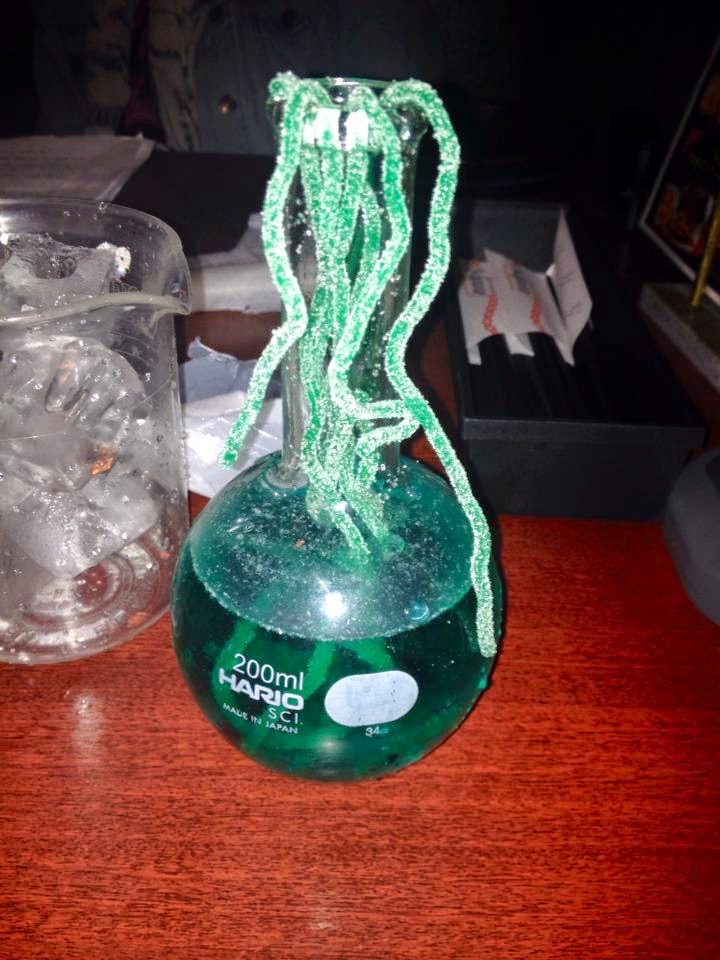 My drink in a science beaker! 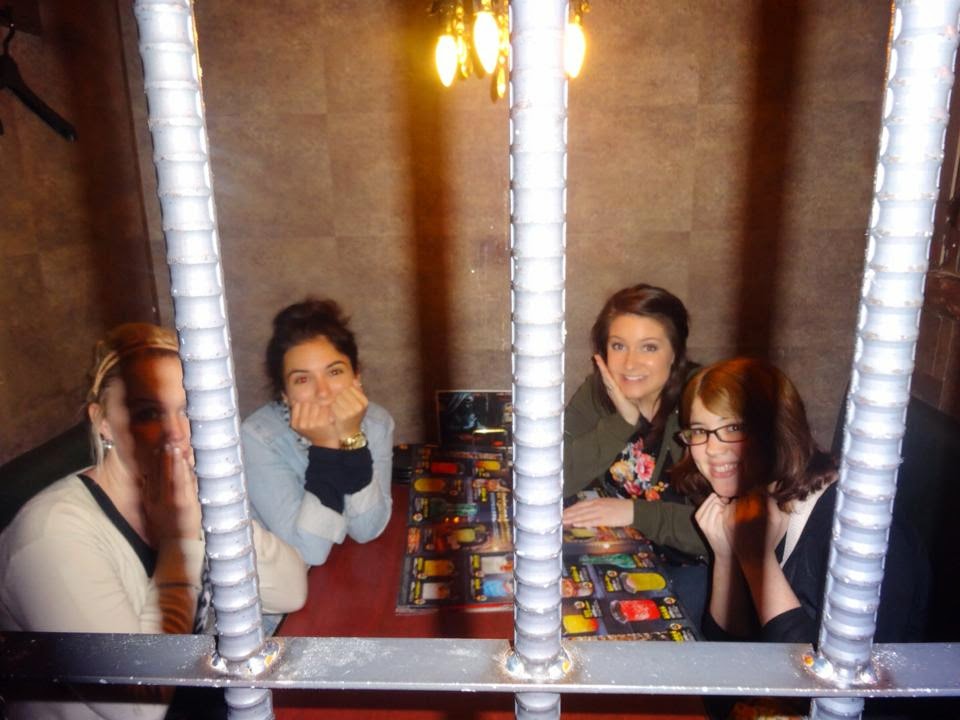 
That night we stayed at a capsule hotel.  It might've been my favorite part of Japan.  Most capsule hotels only accommodate men, but fortunately we were able to book this one, which had a floor dedicated to women travelers.  We paid $40/night to stay there, which was a little expensive, but it was definitely a must-do while in Japan.  There were probably 50 capsules on our floor, along with a communal bathroom and luggage room.  It was super nice and clean which was pleasantly surprising.  Each capsule came with a pull-down shade, a TV, and a built-in radio/alarm clock.  The hotel also provided pajamas for every guest.  I always judge a hotel by the bathroom's cleanliness, and I must say that I would give this place an A+.  I was a little confused when I used the bathroom though, because the stall would play music when you would sit down.  My friends and I concluded that this must've been so that no one could hear you doing your business and gave you a sense of privacy...how cool!! 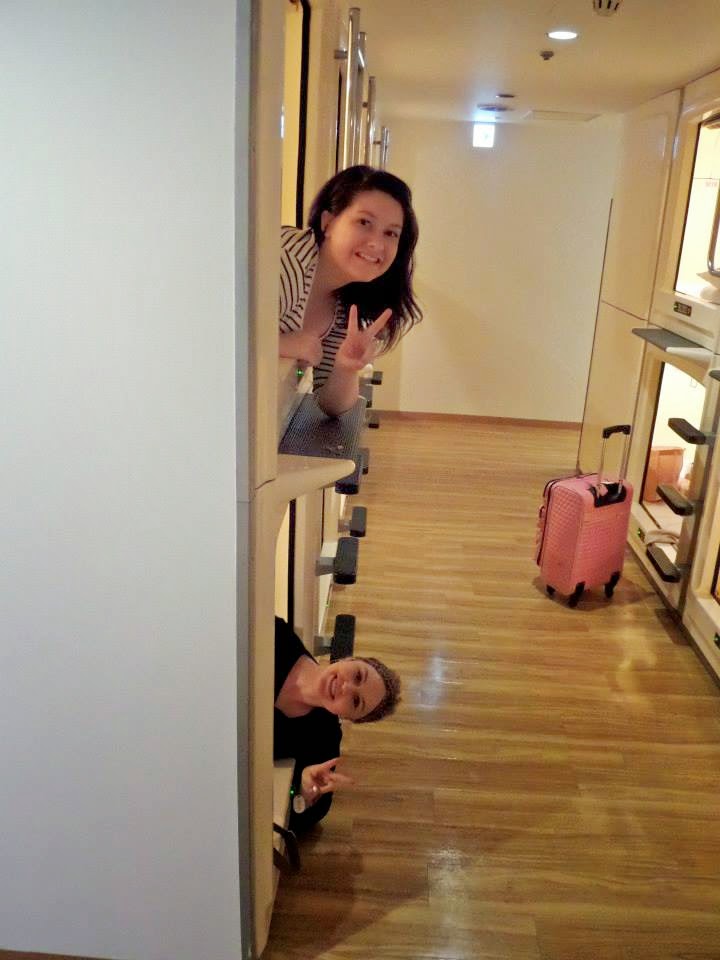 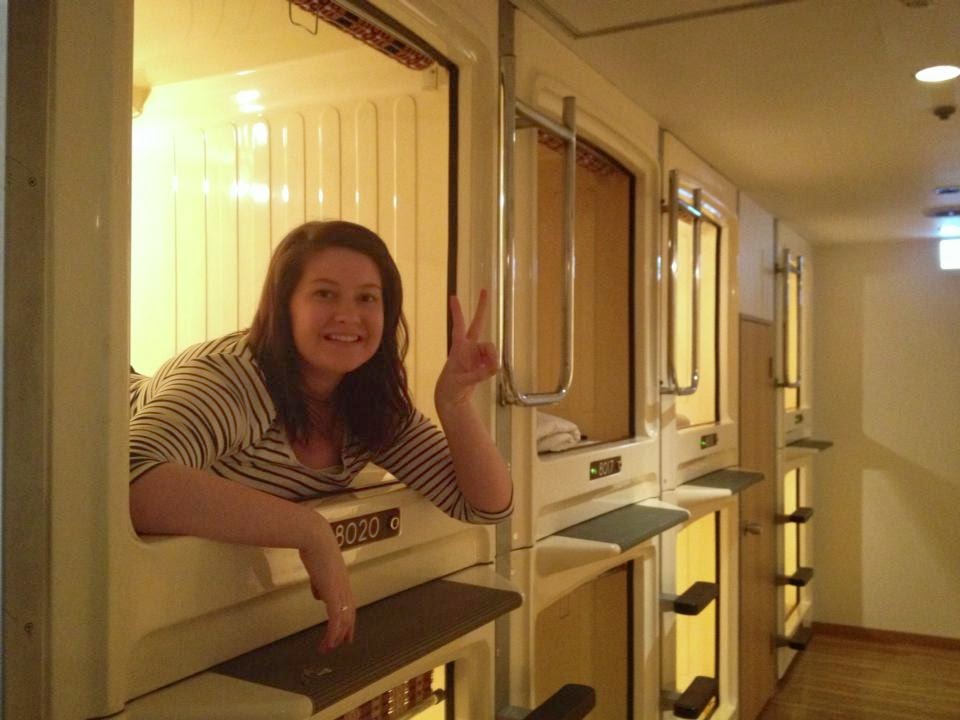 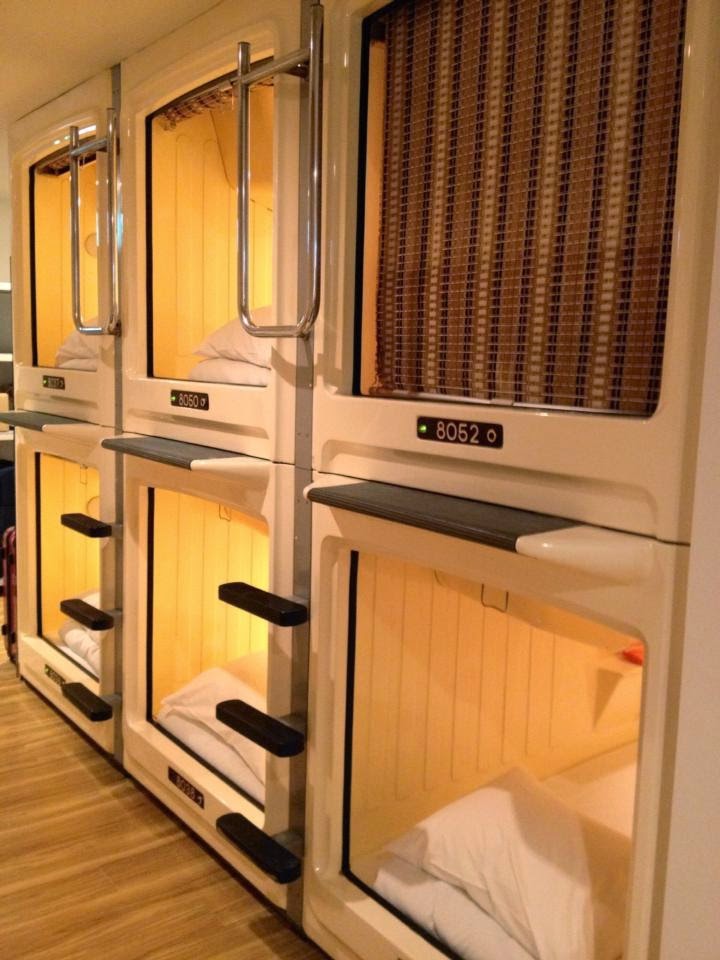 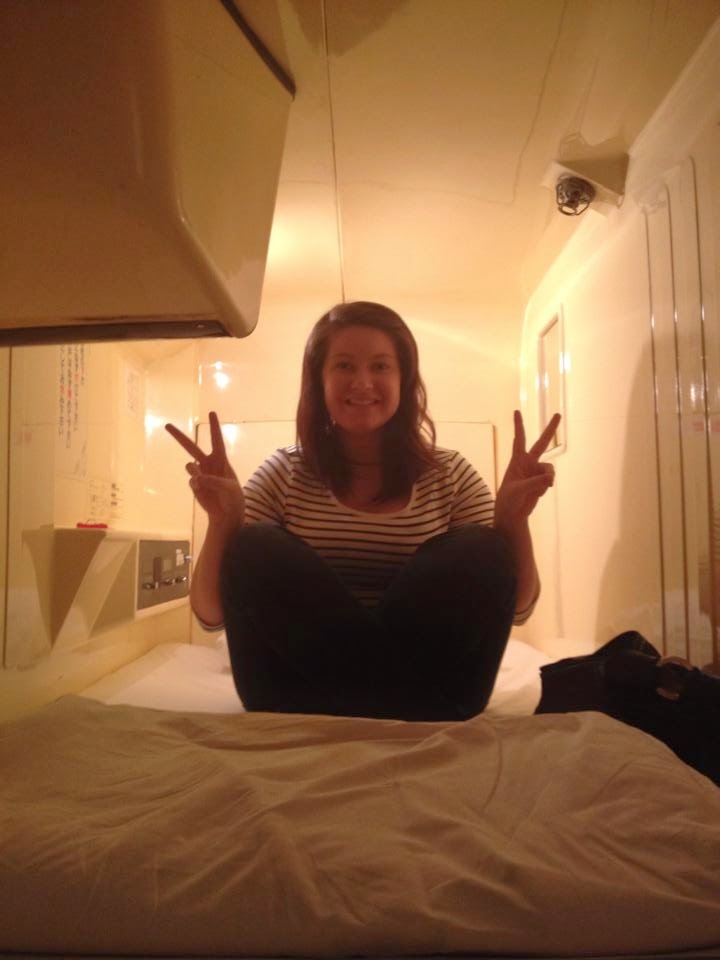 Hanging out in the capsule! (That's the TV in the top left corner)

It was time to take off and go back to Korea.  I really enjoyed my time in Japan, but like any vacation, I'm always ready to go back home at the end.