WE GOT A MCDONALDS!!

So lately it seems like I'm constantly being reminded how small my Korean hometown of Jecheon is; and coming from a small town like Eldon, Jecheon isn't even small.  It's population is 140,000 people and it has 2 universities, but compared to Korean standards, it's a small city.  I guess it's beginning to seem smaller because I've now been here over two years and I've come to meet many people.  Not only do my students come from multiple elementary schools around the city, but I'm also a member of a local gym and I've met many friends of friends; so it seems like Jecheon is becoming smaller because I now can't leave my apartment without running into someone I know or someone I know seeing me and telling me about it later.  But despite the fact that Jecheon seems to be getting smaller, it's actually expanding and in the best way! 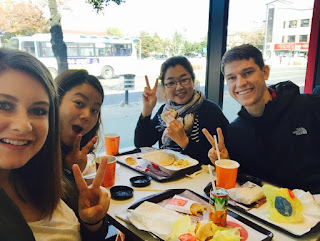 Breakfast is served! I've been waiting over 2 years for this! 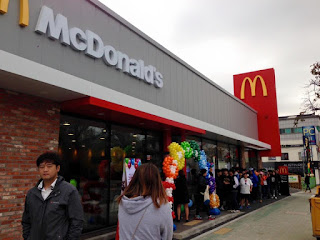 Walking to McDonald's and seeing that line!


You see, what city can truly call itself a city without a set of internationally-recognized golden arches?  That's right,  a city of 140,000 people doesn't have a McDonalds; it's hard to believe I know. But back in August a rumor that a McDonalds was coming to Jecheon started making its rounds; but rumors are rumors so my friends and I didn't want to get our hopes up too much.  Lucky for us the rumor happened to be true and McDonald's officially opened on Oct. 11!  The best and also the worst news is that it's literally a two minute walk from my front door.  Don't get me wrong, I happen to love Korean food now, but having a taste of home is always comforting at times, and McDonald's tastes exactly like home, despite a few tweaks to the menu.  Korean McDonald's serves all the famous staples like quarter pounders, BigMac's, McNuggets, and fries, but there's a couple additions such as a bulgogi burger, which is Korean-style soft, marinated beef made in hamburger form.  The biggest change is the breakfast menu, but I'll certainly take what I can get!  Korean McDonald's breakfast only consists of hashbrowns, pancakes, and the typical breakfast sandwiches on english muffins (no biscuits here...which means no gravy either)! <insert saddest face ever>. 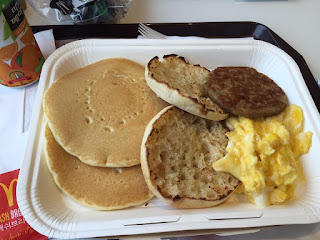 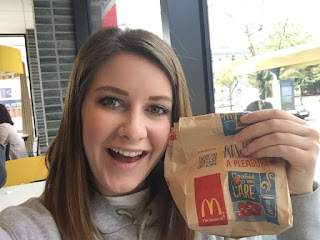 Never been so happy to have McDonalds! 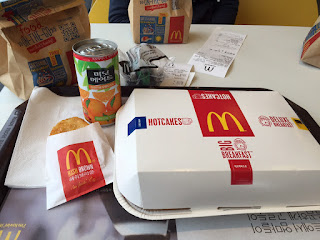 As I mentioned previously, McDonald's opened a couple weeks ago.  On the morning of the grand opening, two of my friends and I arrived a few minutes before the doors were to open and stood in a line that wrapped half-way around the building.  Our wait paid off though because we were part of the first 100 people to order, in which we were rewarded with a free McMuffin.  Best morning ever!

Jecheon has really stepped up its fast-food game recently because not only has McDonald's opened, but a Krispy Kreme also opened a few weeks ago.  Krispy Kreme isn't nearly as exciting to me because Jecheon already has a Dunkin' Donuts, which I personally prefer, but donut variety is not something I'm going to complain about!  Plus, Krispy Kreme runs 1+1 box specials here sometimes, which can only be described as a good thing. 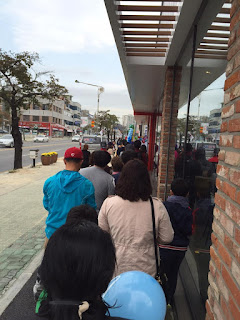 All this talk about Krispy Kreme and McDonald's has got me wondering what I ever did before Jecheon had these (which was literally less than a month ago).  Oh yeah, me and my friends would occasionally wake up early on the weekends to catch a 40 minute bus to the neighboring city to get our fix.  I should state that I’m usually not a fast-food junkie, but absence makes the heart (or stomach?) grow fonder, right?

Here's to hoping Taco Bell is next!