When I began telling people that I was moving to Korea, I was always asked whether or not I knew Korean....and the answer was a big, fat NO.  I didn't even know how to say a simple "hello" when I arrived here.  I know it wasn't the smartest decision I ever made, and I really should have taken a little time to learn a few phrases before I got here, but I didn't.  Some people would be terrified to go to a foreign country where they don't speak the native language, but I can tell you from personal experience that it isn't as difficult to get around as it may seem.  Being able to speak English is something we all take for granted everyday, but we're actually extremely lucky to be able to call English our first language.  Native English speakers can go ANYWHERE in the world and 99.9% of the time can expect to find someone who knows at least a little bit of English.  People whose native language is not English usually choose to study English as a foreign language.  For example, in the U.S. if a person chooses to study a foreign language, it's most likely going to be Spanish, because of our close proximity to Mexico; well, if you live anywhere else in the world (Europe, Asia, Middle East...) and you choose to study a foreign language, it's most likely going to be English, because it is quickly becoming the gateway language of the world.  On the other hand, if you grew up in Germany (speaking German, of course!), and you want to travel to South Korea (or any non-German speaking country for that matter), you would have a terrible time finding someone that speaks German to help you out.  So let's all take a moment to be thankful that we speak a language that allows us so many opportunities, especially when going abroad.

So back to me not knowing any Korean....

For the past few weeks, I have been taking Korean language lessons with about 8 other native English teachers that also live in my city.  We are taught by a fellow English teacher who happens to be Korean-Canadian (she was born in Korea and then moved to Canada in elementary school, so she is bilingual----something I aspire to be one day!).  The Korean language is not easy to learn, for obvious reasons.  For one, the Korean alphabet, known as Hangeul, uses symbols instead of western-style letters found in languages like English and Spanish.  So no A, B, C, or D.  Hangeul contains 14 consonants and 10 vowels.  Each consonant and vowel has its own sound, and words are spelled exactly how they sound (which can't be said for English).  So after 3 weeks of Korean lessons, I can already read and write Korean because I've memorized each symbol and its sound.  While it may sound impressive that I can already read and write within a few weeks of learning, don't be fooled; I can read and write, but that doesn't mean I know the meaning of the words I'm reading...  But, I have learned a few phrases/words that I am able to speak without hesitation.  These include: Hello, My name is Kylee, I am American, I am foreign, Yes, No, Teacher, dog, downtown, I like..., I don't like...

The Korean alphabet known as Hangeul 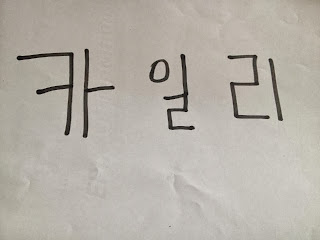 Kylee (in Korean), pronounced Kah-eel-lee because there is no "I" sound in Hangeul

Some words are the same in English and Korean, too.  Here's a few words that are the same in both languages: bus, game, radio, banana, pineapple, television, piano, Canada, air conditioner, medical clinic, menu, supermarket, camera, and ice cream (and if you know me well, you know that this is an important one for me to know!!)  Also, my students love to say "Oh my god!"because they hear it in movies and songs, and the phrase has pretty much been adopted into the Korean language now.

There is also Konglish.  Konglish is English words that have been adopted into Korean culture but have a different meaning/definition than what we would think.
Konglish examples (the Korean meaning is in parenthesis, and you should know the English meaning):
> glamour (a woman's bust)
>cider (Sprite)
>jelly (gummy bears/worms)
>Burberry (a trenchcoat)
>one room (a studio apartment)
>cunning (cheating) 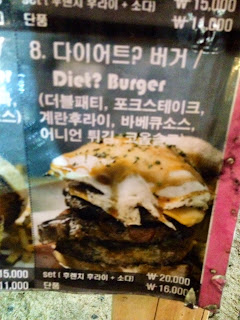 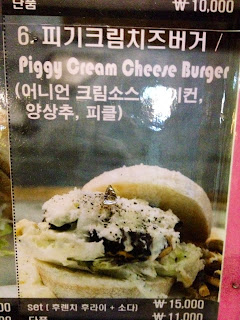 Some signs I saw in Seoul that were in English but made no sense!!!  It is actually quite common for Korean advertisements, clothing, etc. to have English writing on it, but many times it is just a bunch of English words put together that don't make sense when combined!

This is just a little insight into the Korean language that I've learned thus far.  My goal is to learn enough Korean to be able to have a basic conversation with my fellow teachers at my school...wish me luck!  I guess you have to start somewhere..