Korean students are like any other students and enjoy playing jokes on one another.  During my time here, I've become accustomed to the students' rough-housing.  They put each other in headlocks, wrestle one another to the ground and will physically hurt their friends; but they're just playing.  It really shocked me at first, but after I noticed that none of the Korean teachers take any notice to this, I began to get used to it.

Well, there's a special move that Korean kids (boys and girls both) like to use when joking around with friends.  It's called the dong-chim.  Luckily, I have not experienced the dong-chim yet, and nor do I want to.  It literally translates as "poop needle".  The dreaded dong-chim is when Korean kids clasp their hands together into the shape of a gun, run up to an unsuspecting victim and poke his/her butt-hole, and yell "Dong-chim!".  Yes, you heard that right...  Kids stick their gun-shaped fingers into the crack of the victim.  They think it's absolutely hilarious!  (Which it is, as long as you're NOT the one getting fingers to your butt).

You might assume that adults are immune to this childish act because kids would never do that to their teacher, parent, etc, right??  NOT TRUE!  Young or old, boy or girl,  you can fall victim to the dong-chim.  You constantly have to watch your back (I mean ass..) because you are a target if you are not paying attention and you happen to bend over or turn your back.  I have witnessed the dong-chim on a few occasions, and it looks as unpleasant as it sounds.  I'm trying to avoid it at all costs. 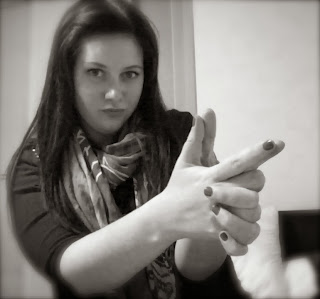 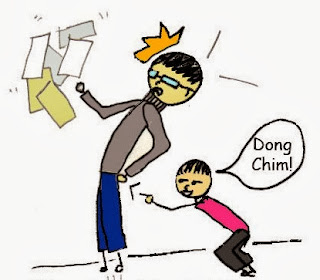 A comic of the dong-chim being performed