Like in most countries, sports play a big role in Korea.  Sports are a source of entertainment and people go watch live games just like in the U.S.  The biggest sports in Korea are soccer, baseball, and basketball.  I'm a big sports fan myself, so I've been really wanting to go to a game.  Well today, I got to experience my first professional sports game in Korea!  A few friends and I went to see a professional basketball game.  The Korean Basketball League, or KBL, is the equivalent to the U.S. NBA.  The KBL consists of 10 Korean teams.  They play a regular season and have a championship at the end of the season, just like the NBA. 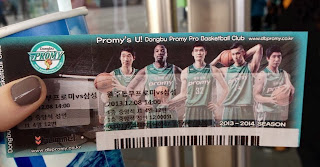 To get to the game, we took a bus to Wonju, a city about 45 minutes away from where we live.  Wonju is home to the Dongbu Promy's professional basketball team.  Tickets were extremely cheap! Courtside seats were around $28!!!  Courtside seats were sold out when we bought tickets, but we still got really, really good seats for $12.50!  Our seats were 4 rows from the court, and we were right behind the opposing team's bench!

There were tents set up outside the arena with street food, so we grabbed a bite to eat before the game.  I got a popcorn chicken and coke combo; it comes in one cup.  The soda is in the bottom of the cup, and a plastic dish sits on top of the cup for the chicken.  It was a really clever concoction!  Concessions inside the arena were super cheap as well.  They had cotton candy, soda, popcorn, candy, etc.  In the U.S, it would be normal for soda to be like $5-6, but luckily Korean concession prices aren't inflated. :) 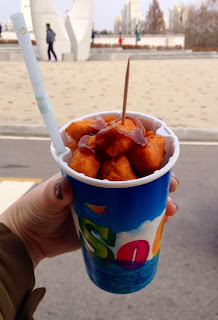 Chicken and Coke combo in one convenient cup! 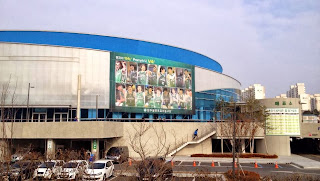 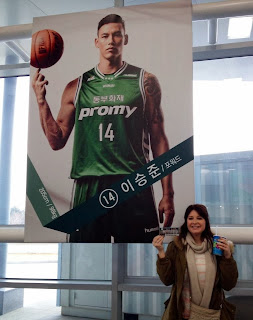 The announcer introducing the players! 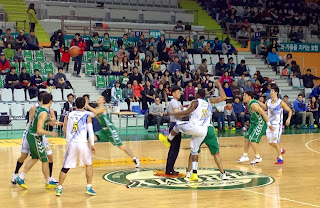 
Once inside the stadium, we found our seats and watched both teams warm-up (shooting around, doing layups, etc.)  On our seats were complimentary signs for the game that said something like, "Go Dongbu".  Both teams had 2-3 foreign players; all of the foreign players were American, except one (we looked up the roster).  Our favorite foreign player was Chris Moss.  He was one of the better players on Dongbu's team and was a crowd favorite.  After a player scores, the crowd chants their name a few times.  Chris Moss scored a lot, so the crowd would chant "Moss-uh", "Moss-uh". (Koreans tend to add the "uh" sound to some words...it's just a part of their Korean/English accent.)  There were some chants we were able to join in on throughout the game.  For example, the crowd would yell, "Defense" and "Goal in".  We also noticed that each team had a translator.  During time-outs, the translator would translate what the coach was saying to the foreign players. 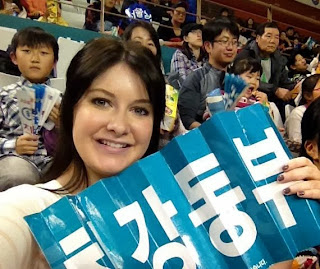 The game consisted of 4, 10-minute quarters.  The teams were not as good as in the U.S, but they were decent.  The atmosphere was amazing though.  It was funny to hear the Korean fans yelling and cheering.  We were even lucky enough to see a few dunks!  There were also cheerleaders who would dance and cheer during time-outs.  During different parts of the game, the cheerleaders would pass out food to the fans who cheered the loudest.  They passed out Pizza Hut pizzas, Outback Steakhouse takeout, and threw basketballs into the stands.  The girls sitting by us were given one of the pizzas and they were kind enough to share with us. :)  During half-time, there was a half-court shooting contest and a head-banging contest (random, I know...but so entertaining!).  We also got to see the Kiss-Cam!  No game is complete without the Kiss-Cam.  Half-time was extra special because we witnessed a Korean proposal!!!  A guy came to the center of the court and professed his love to his girlfriend, who came down to the court from where she was sitting, and accepted his proposal!  It was really cool to see! 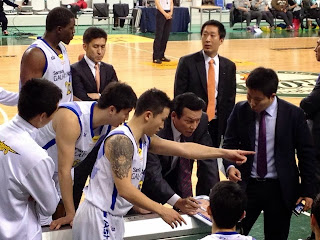 The game went into overtime, but Dongbu ended up losing.  After the game, you can wait for the players to come out of the locker room to get autographs.  We waited, but only one player came out; my friend grabbed his autograph though.  I already can't wait to go see another game!