Barbara in Korea: Adventures with my Mom

Ever since my mom booked her ticket to Korea in February, I've been counting down the days until she arrives.  Well, after a grueling 24-hour journey, she made it to Korea July 2nd.  I ditched school a little early so that I was able to meet her at the airport.  I had a big sign and smile waiting for her when she walked through the arrival gate; and, I got the hug I'd been waiting 11 months for!

Since she's arrived, I think she's already experienced quite a lot; some things we've done together, and some things she's done alone because I'm still at work during the week.  On our first weekend together, I made sure to take my mom to the "hotspots" of Jecheon.  First on our list was Urimiji Lake, which is a reservoir on the outskirts of the city.  While there, we walked around the park which surrounds the lake and took a ride on a swan-shaped paddle boat.  There are a few food vendors in this area, so I was excited to have my mom try some authentic Korean street food including a chicken/coke cup and a spiral potato stick (which is a whole potato cut into a spiral shape, fried, and dipped in a seasoning of your choice).  We also took a walk through the rice fields.  Rice is a staple at every Korean meal, so there is a lot of land devoted to growing the stuff!

My mom also got to see Cheongpung Lake, which is a large nearby lake.  My one landlord was kind enough to drive her there, give her a tour, and take her to dinner since I had to work. 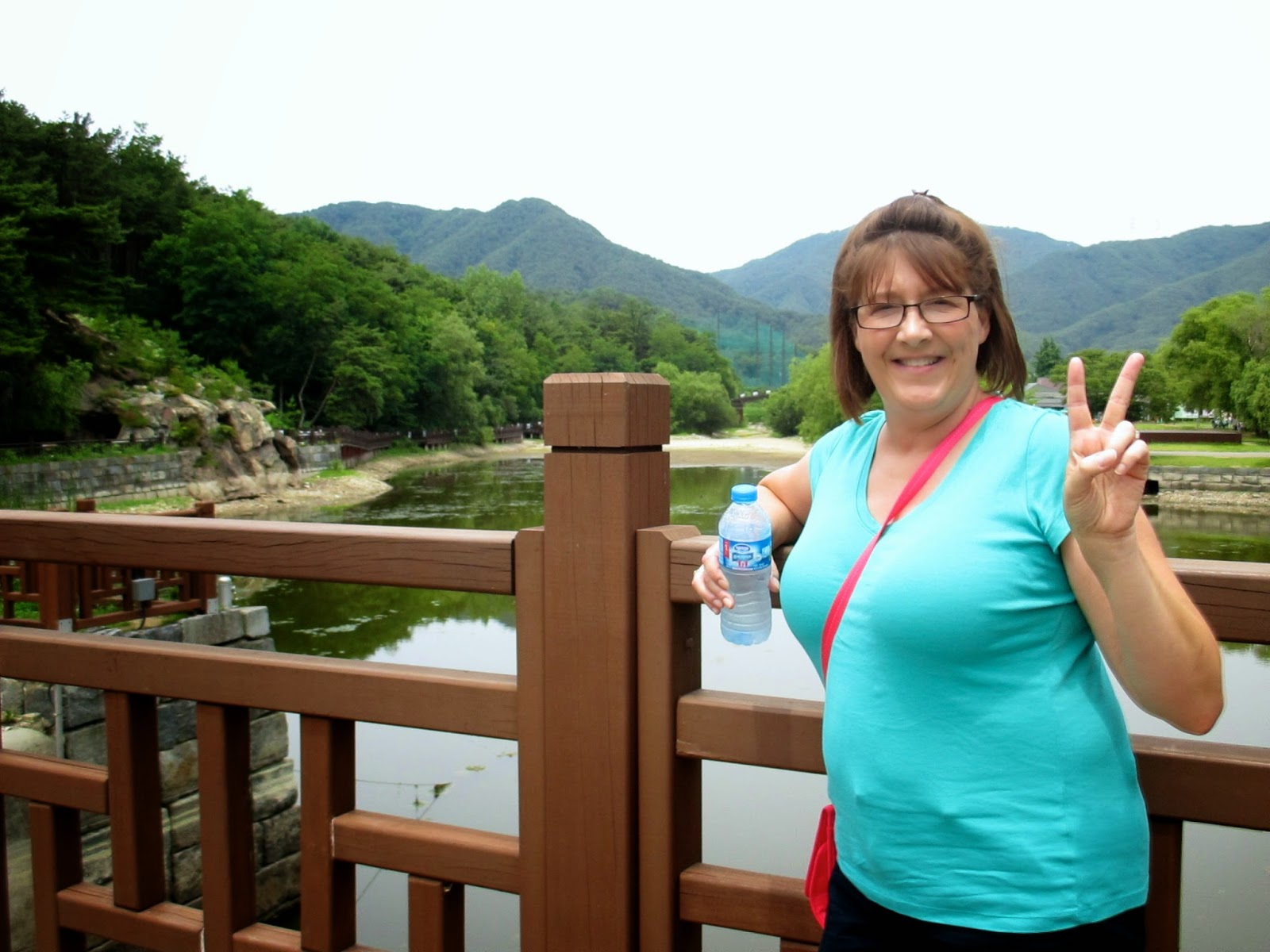 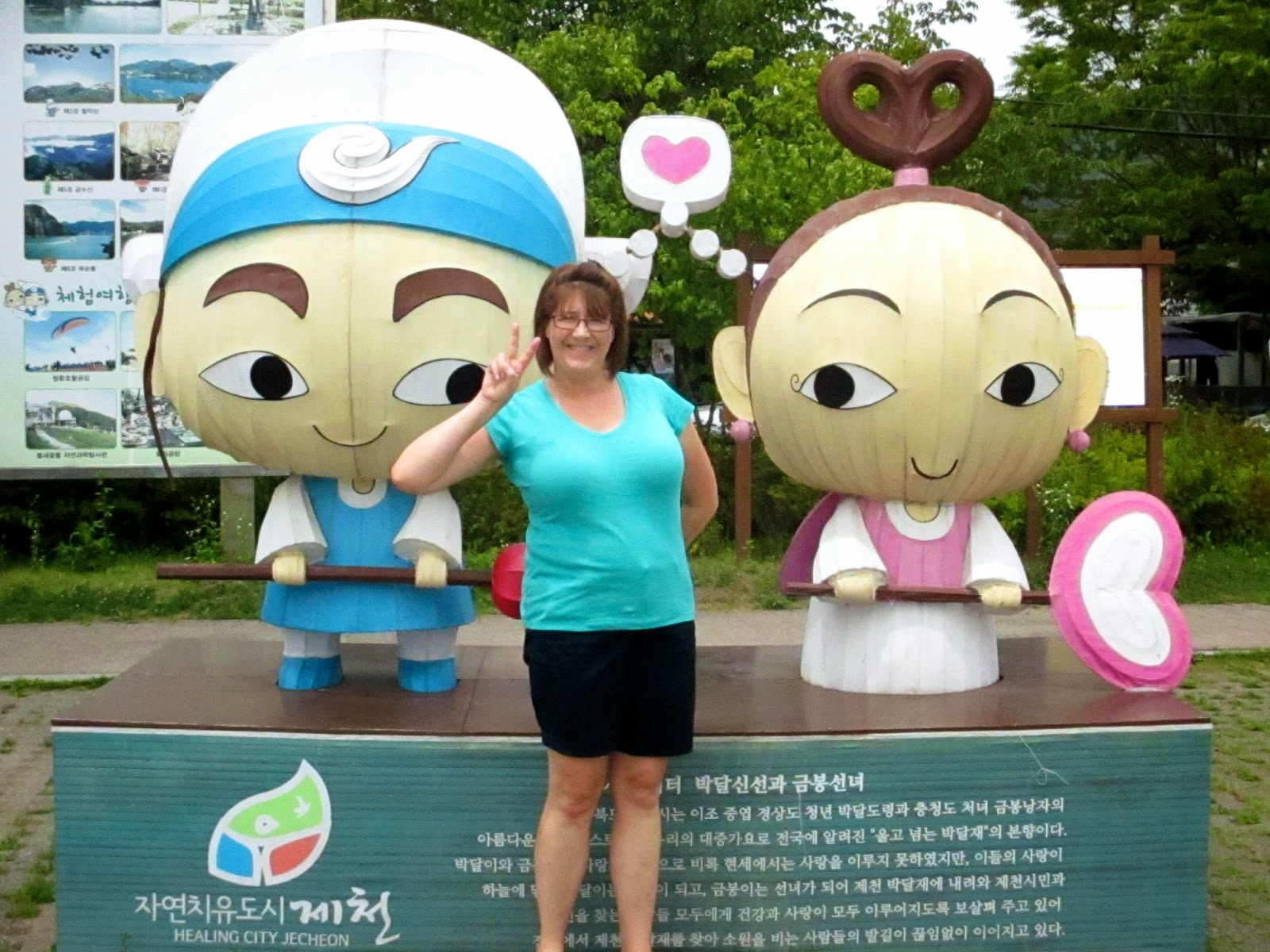 With the Jecheon characters 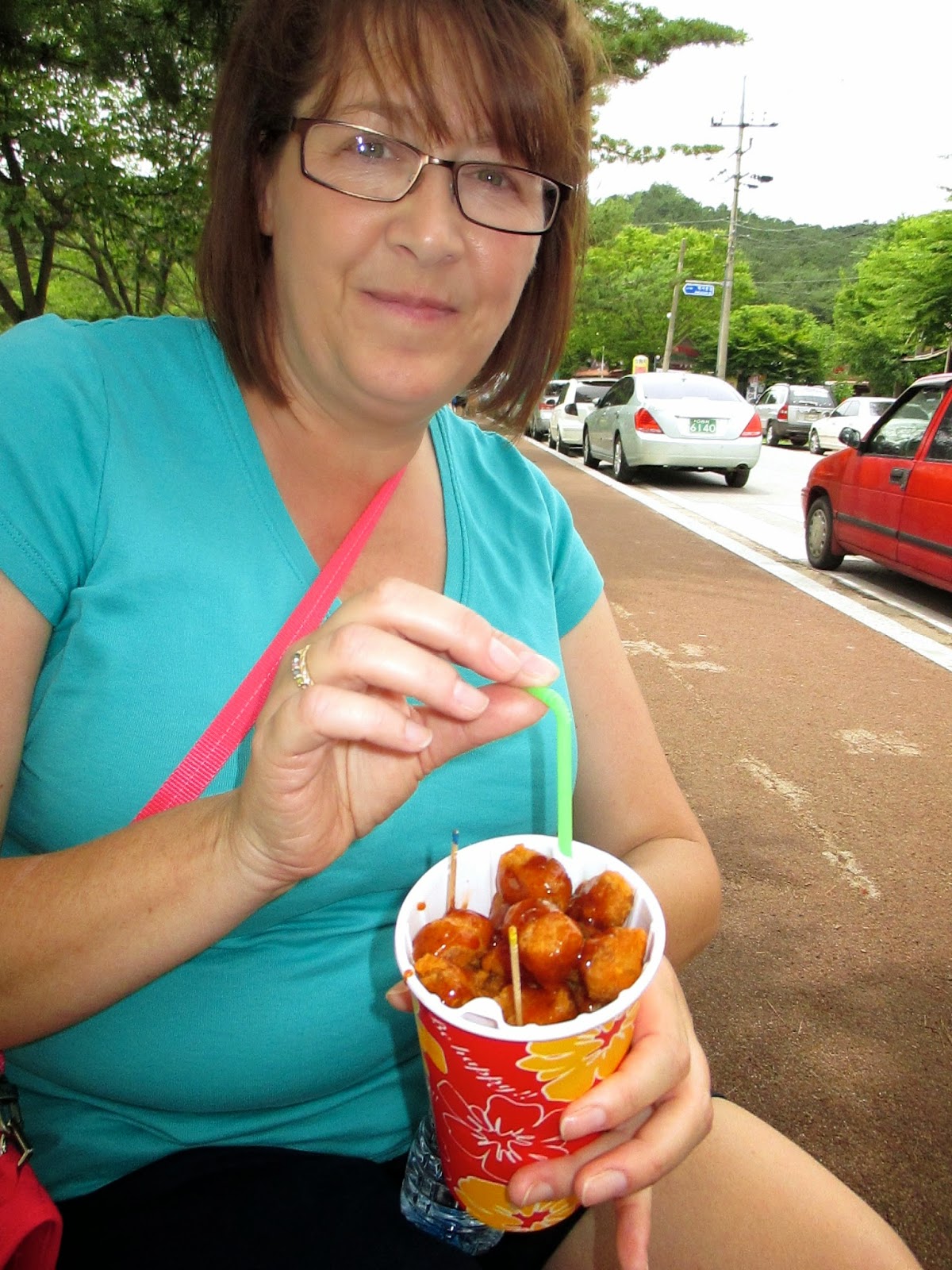 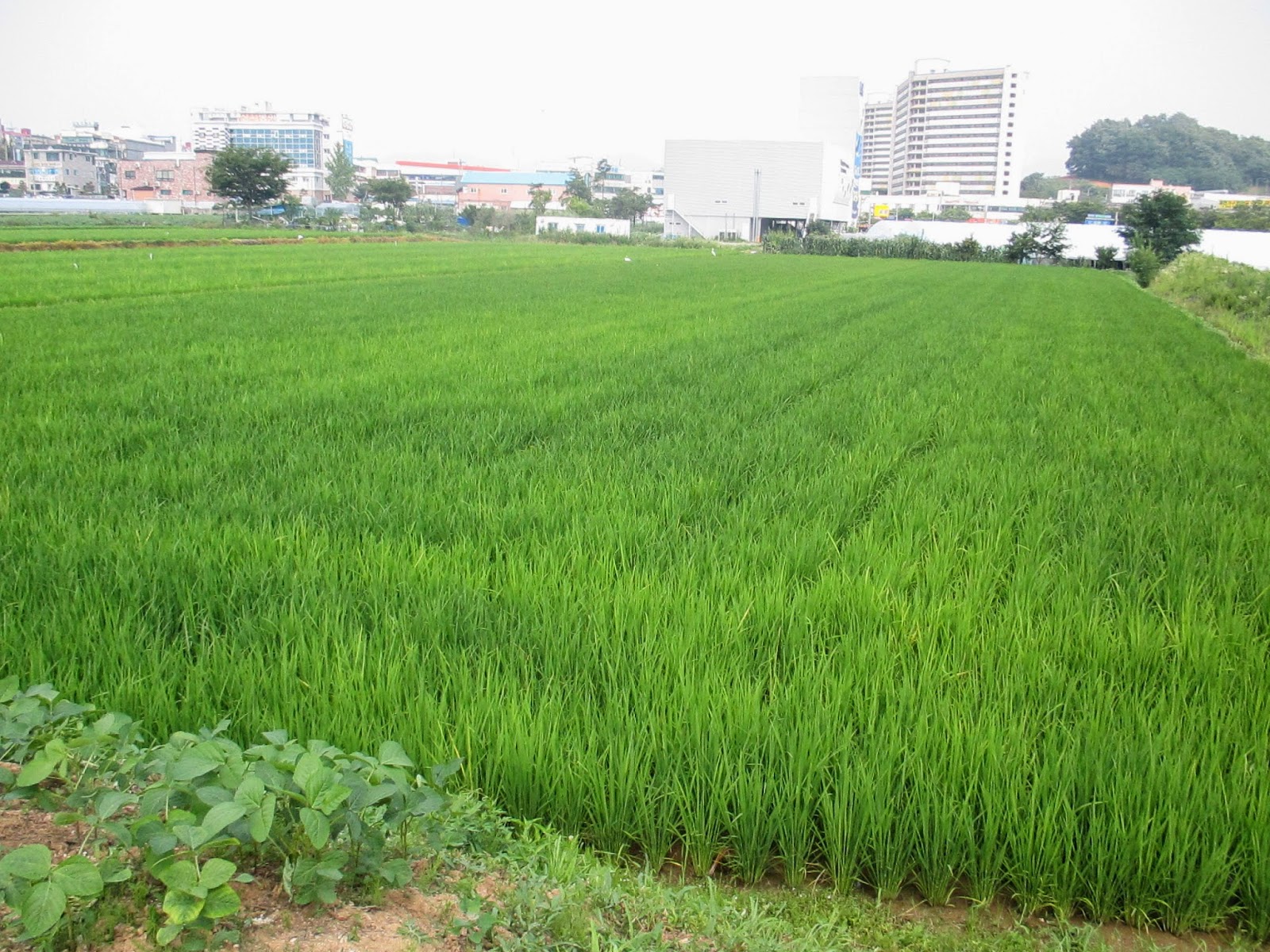 Afterwards, we stopped at the dog cafe to get our animal fix since we both miss our pets a lot.  As I've mentioned before, animal cafes are very popular in Korea, and we both really enjoyed playing with the several dogs that were there. 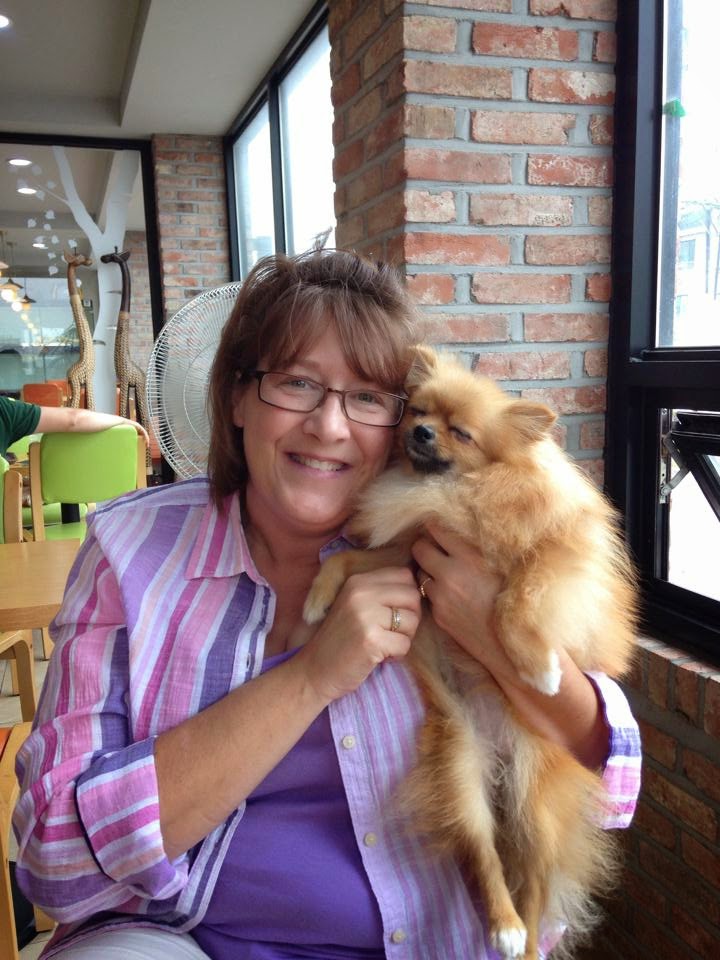 This past weekend my mom, my co-teacher, a co-worker, my friend and I all headed to the east coast of Korea to see the infamous Haesindong Park, aka the Penis Park.  It attracts many visitors every year, especially foreigners...I'm sure you can guess why!  Yes, the park is filled with nothing but penis statues: fat penises, skinny penises, short penises, long penises, pensises with faces, and even a penis teeter-totter.  You get the picture.  The penis park doesn't just exist for dicks and giggles; there's a story behind it.

The Tale:
Supposedly a long time ago, there was a young virgin girl who drowned in the ocean in which the park overlooks.  After the drowning, fishermen noticed that fish seemed to be disappearing from the water.  The fishermen concluded that the loss of fish must be because the girl was haunting the ocean and was angry after dying a virgin.  In order to appease the girl's spirit, the fishermen built penises, and more penises and more.

Obviously these fishermen were smart, because, duh, what else does a virgin girl want?  Nowadays, the park is just a interesting place to visit in a very conservative country.  Did I mention there were families with young kids there?  No?  Well there were, and it was weird. 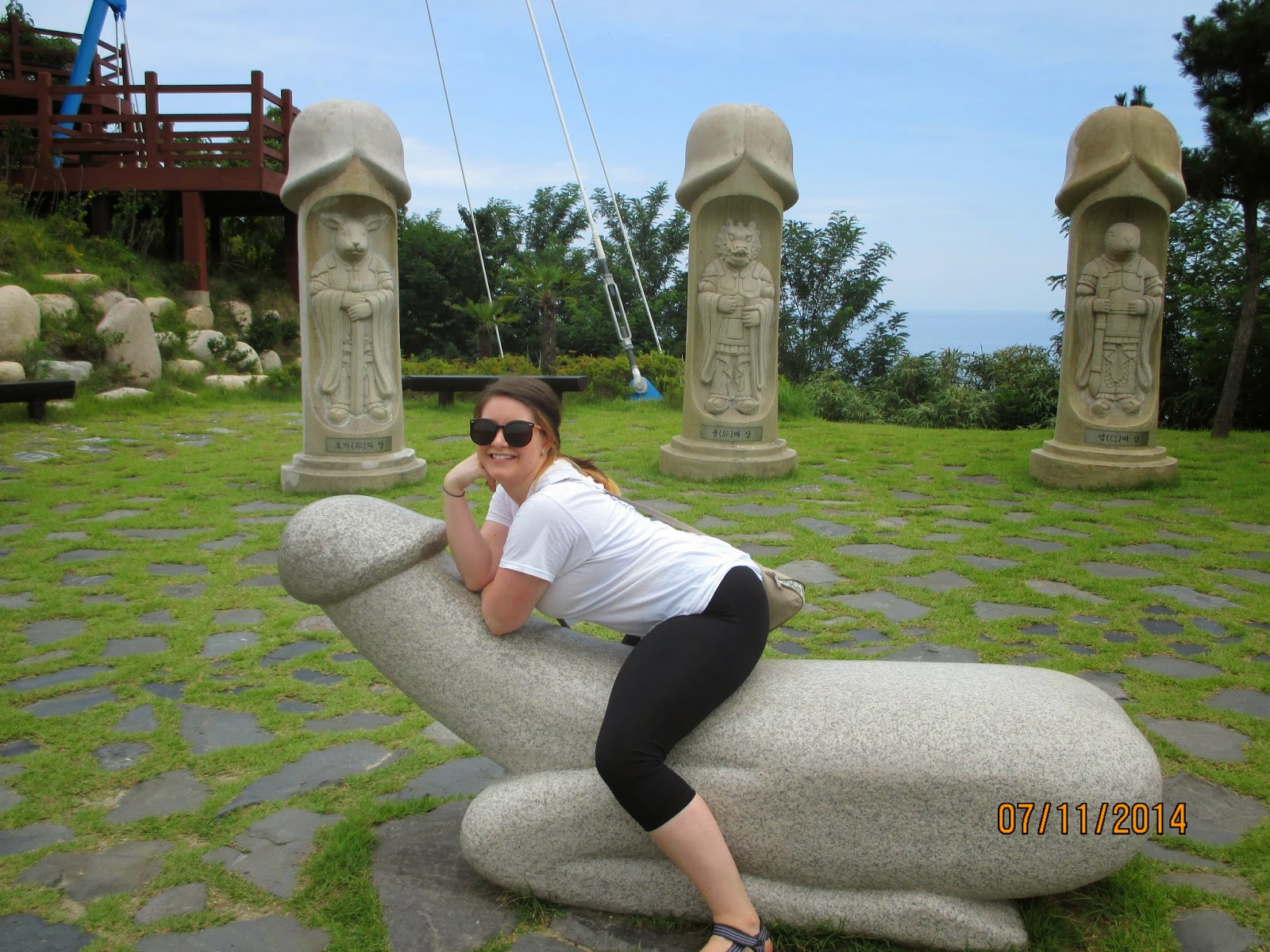 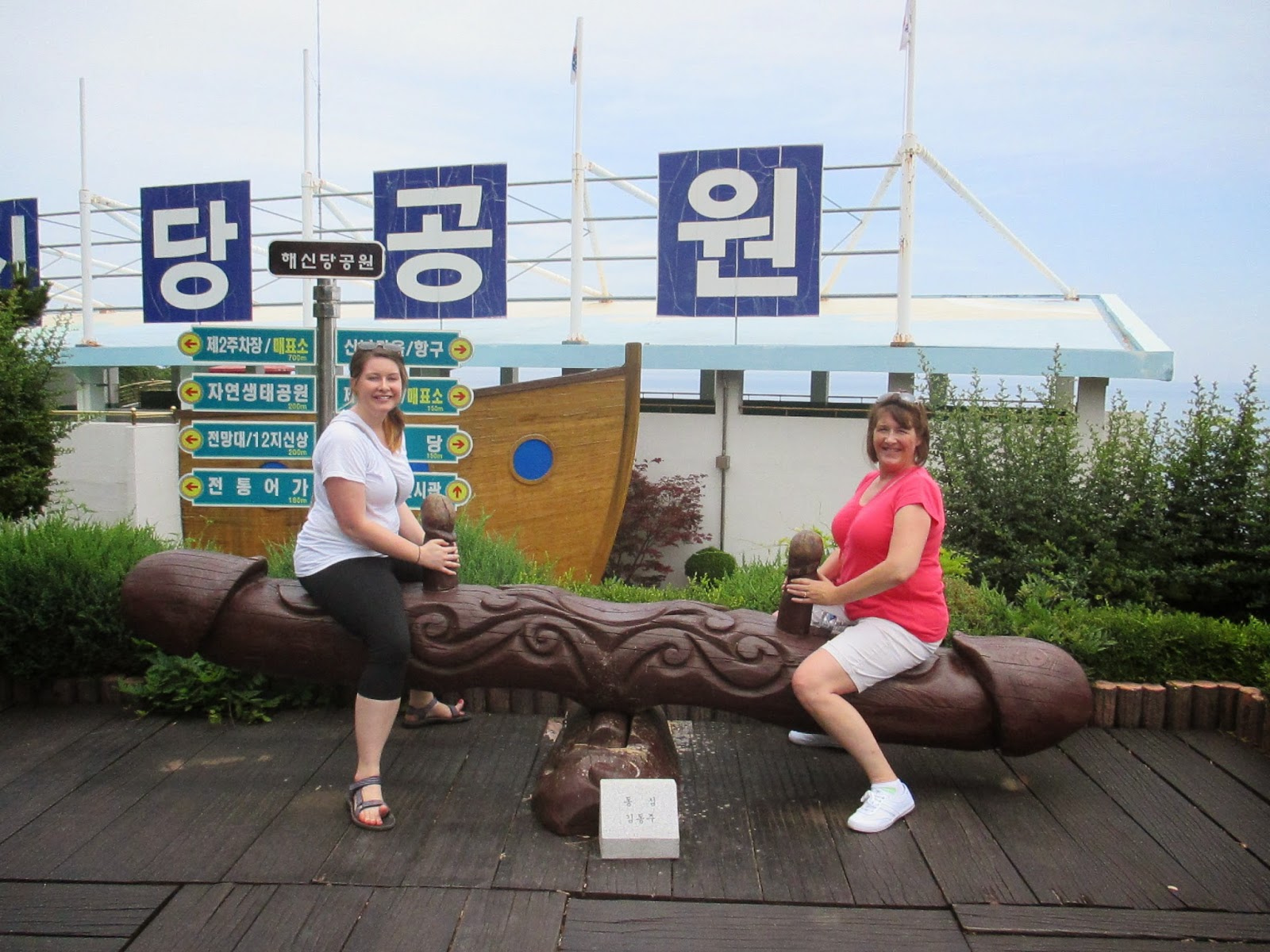 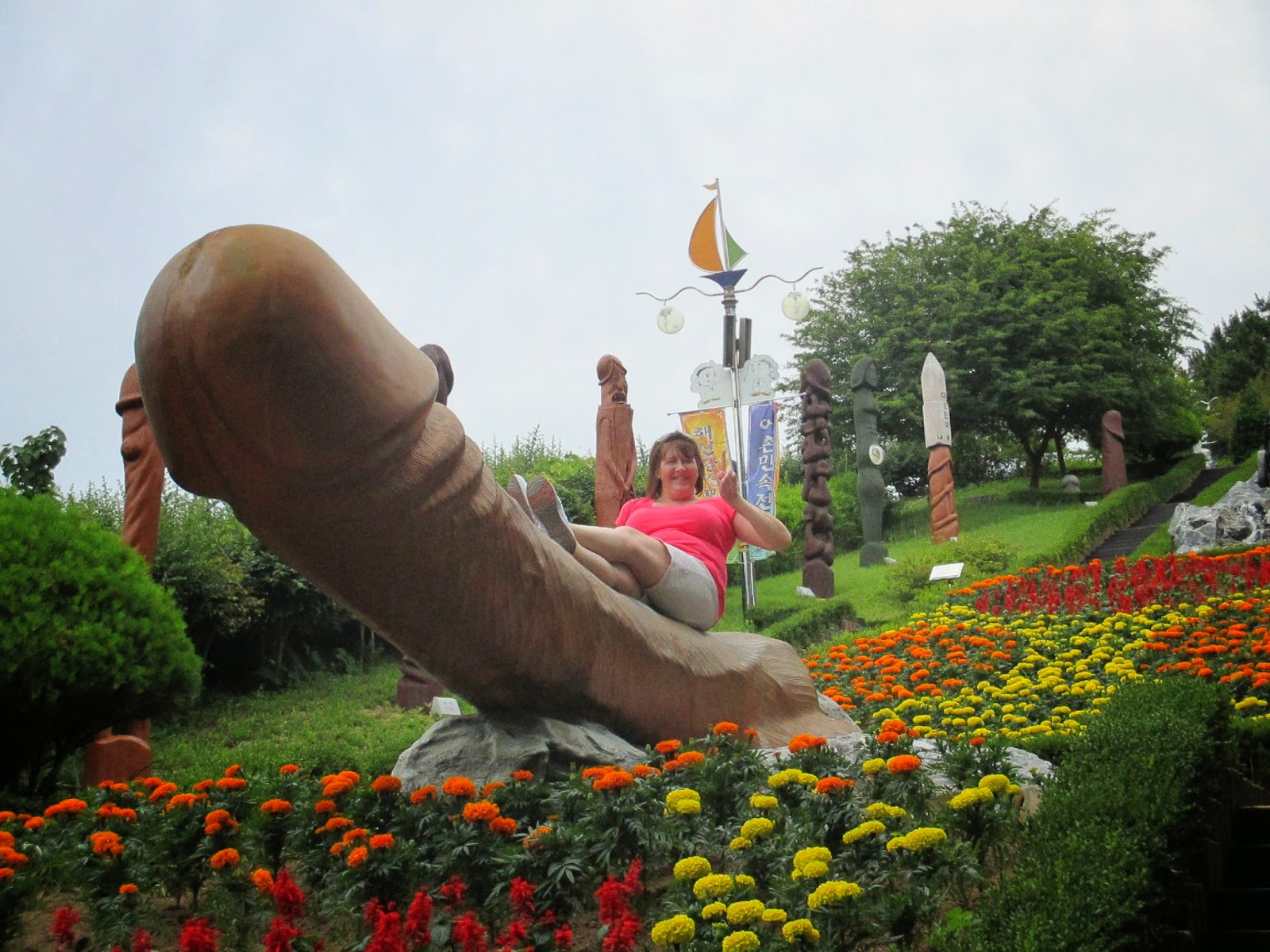 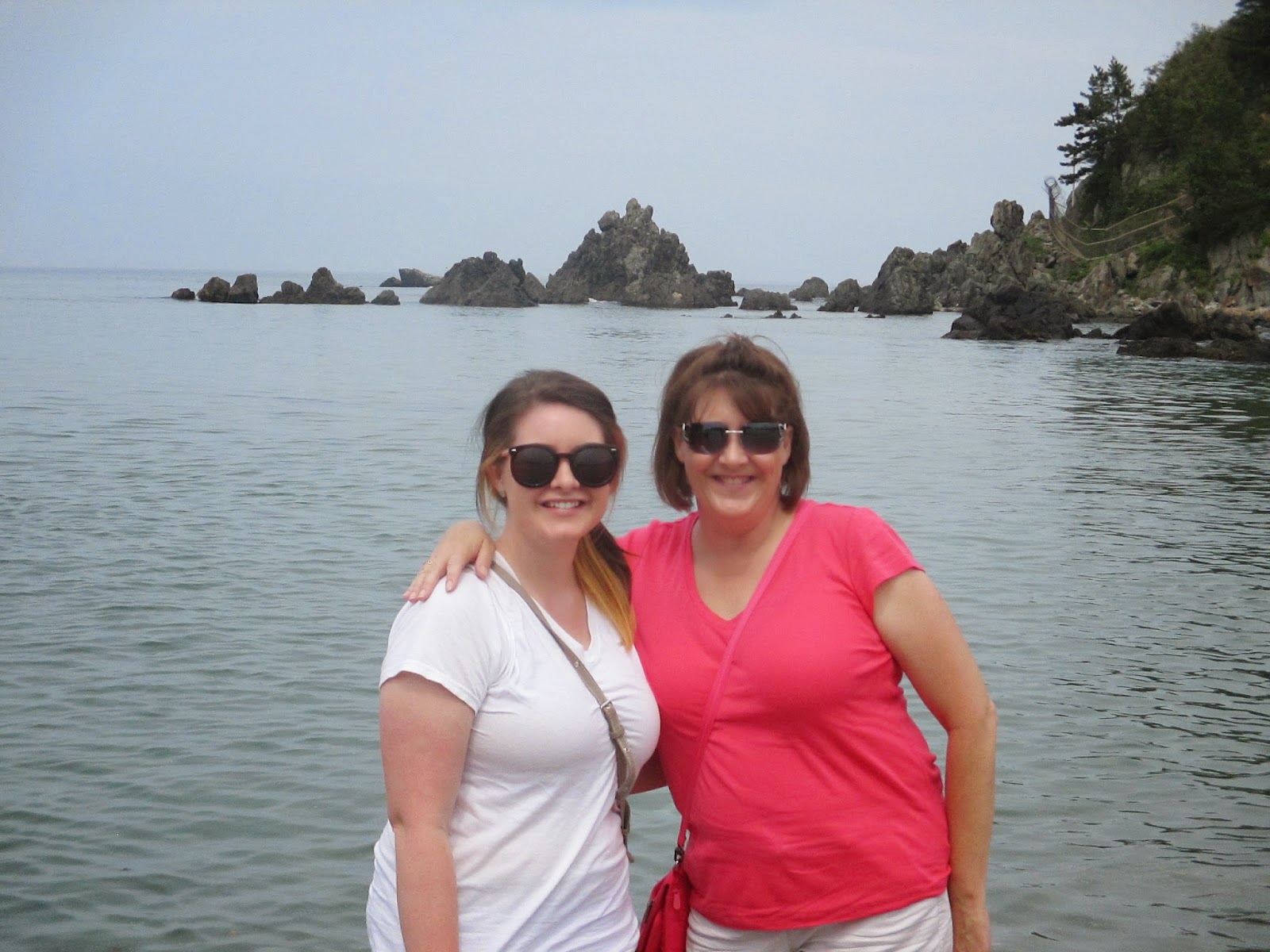 Since we were already near the coast, we decided to hit up a local beach.  The beach scene in Korea is quite different from the U.S.; instead of swimsuits, everyone is swimming in regular clothes, and instead of beach towels, there are tents set up on the beach.  Koreans even cook ramen and barbeque on the beach!  It's just a different experience here. 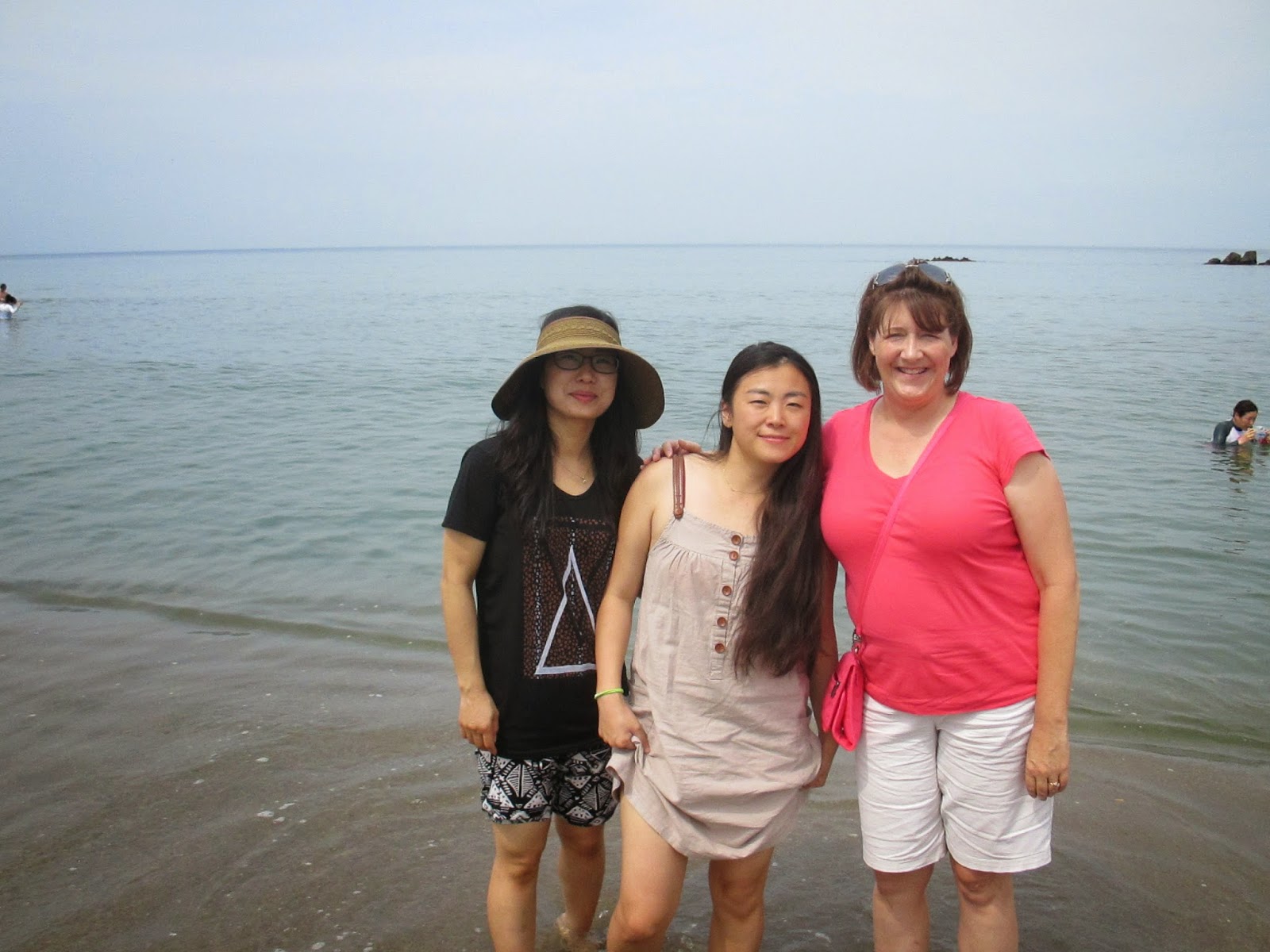 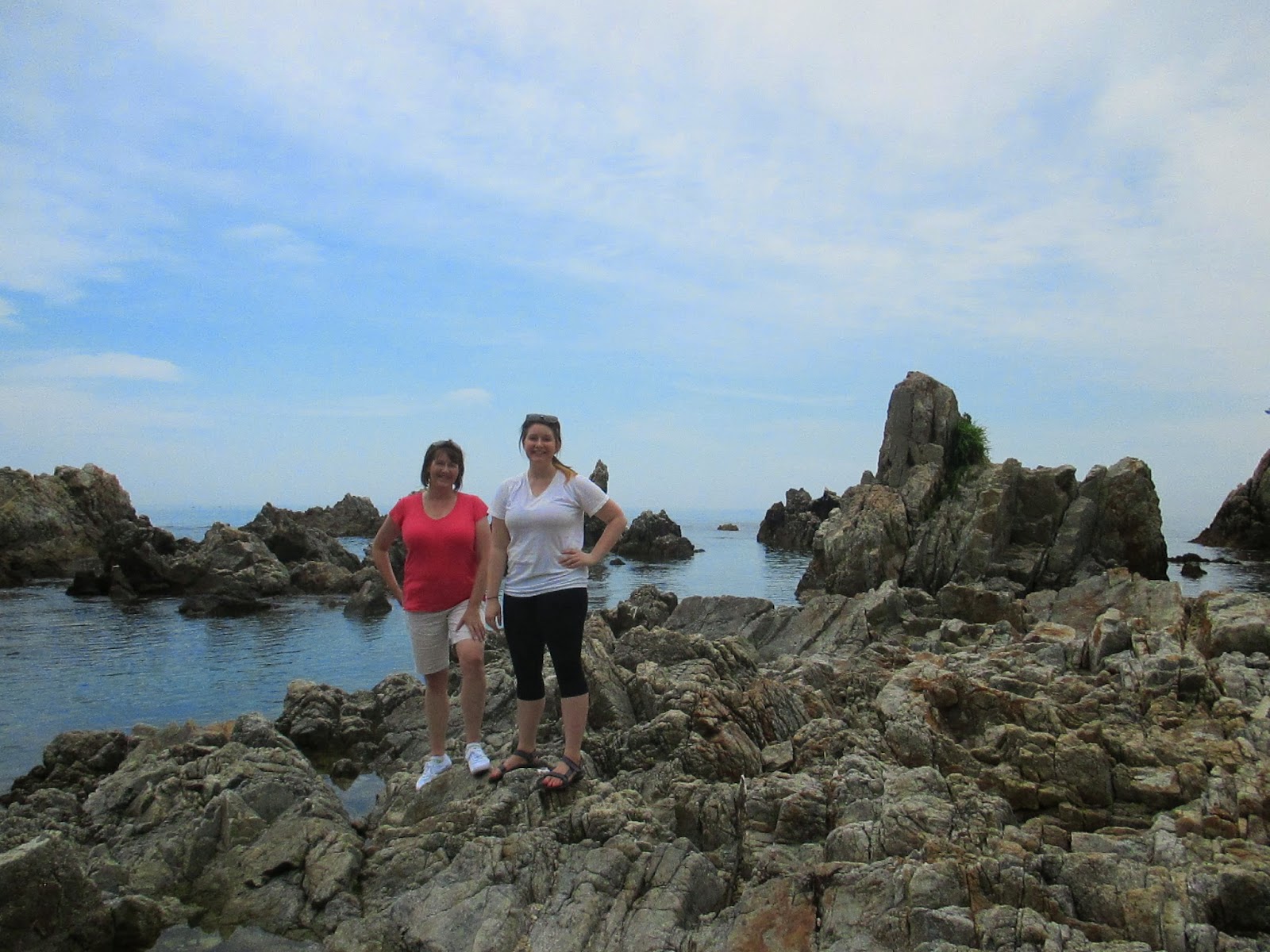 Food is a big part of Korean culture, so I've had fun taking my mom to some different restaurants to try out Korean food.  The first place I took her was a traditional restaurant in which you eat on short tables and sit on the floor.  Traditional restaurants often serve each person a bowl of rice and then everyone shares multiple side dishes, usually soups and vegetable-based dishes which have been fermented.  We also ate Korean BBQ one night.  BBQ is my favorite here.  BBQ consists of cooking meat (pork, beef or duck) at your table and it is also served with many side dishes.  Surprisingly, my mom has seemed to enjoy Korean food; this was something that I definitely had to adjust to when I first arrived.  My mom has faced one major setback though: chopsticks!  She has been a trooper and tried using them at every meal, but the waiter always ends up bringing her a fork.  Some things just take time. 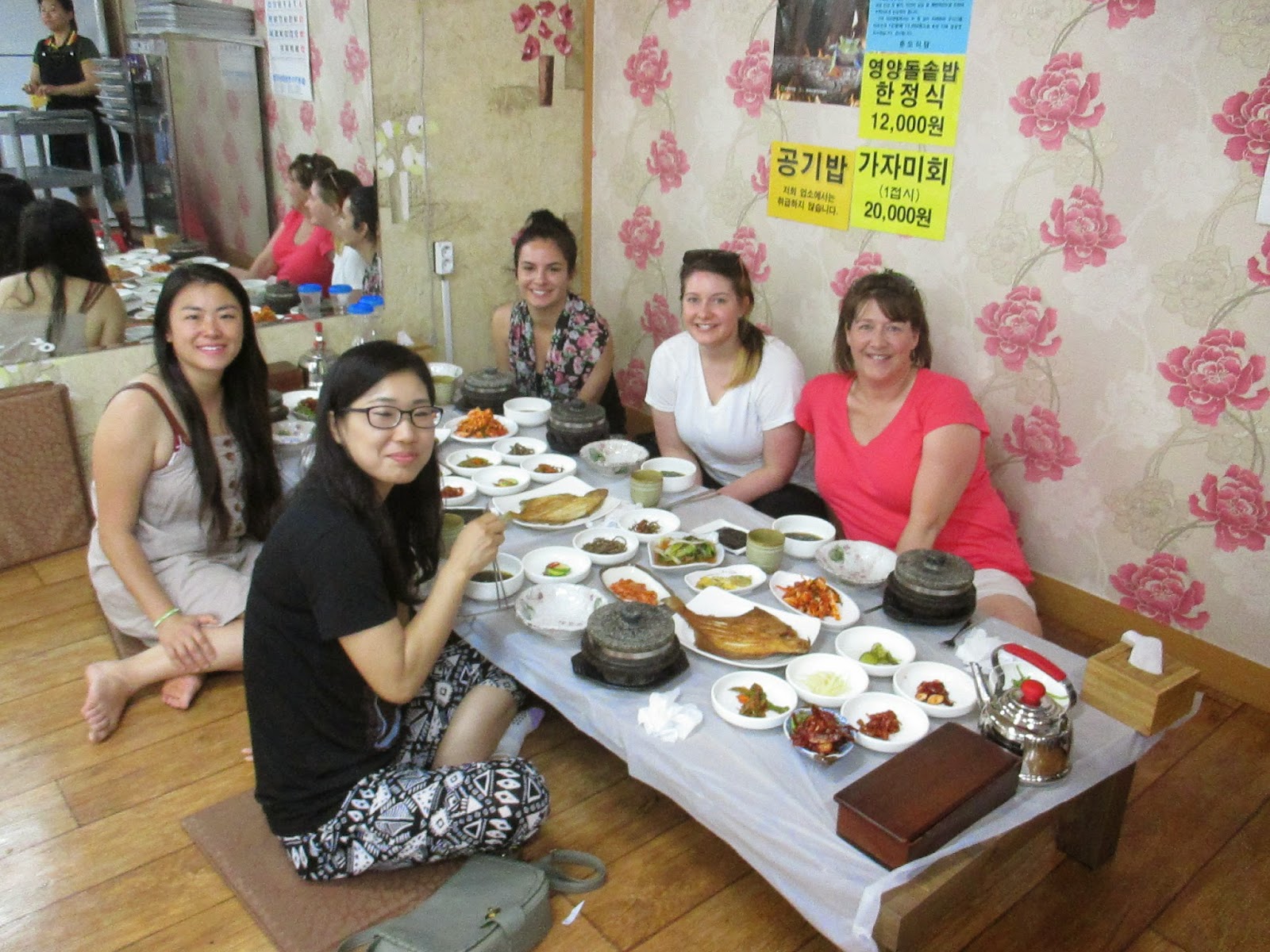 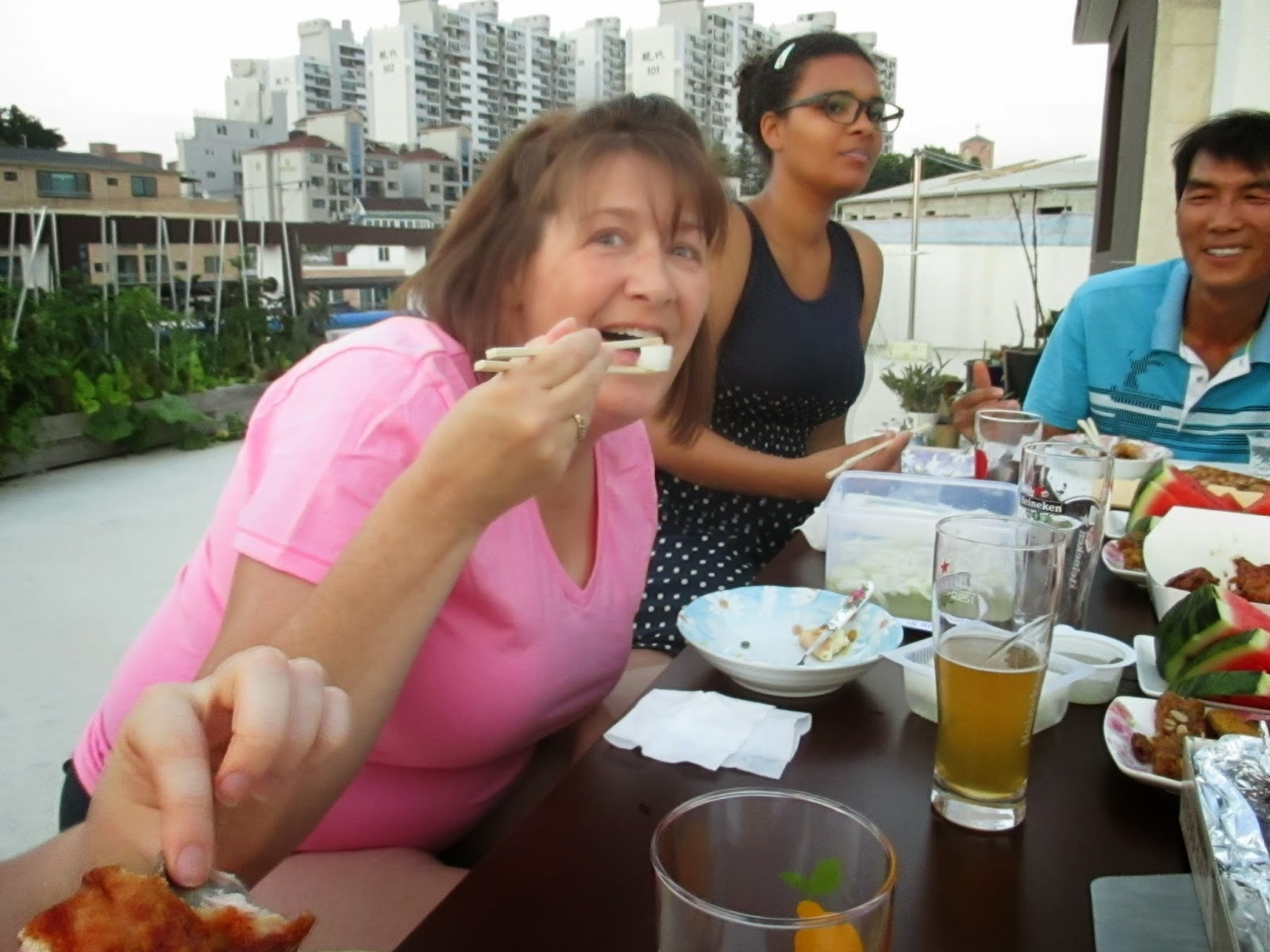 My mom has also visited my school on a few occasions and met many of my students and co-workers. Everyone has enjoyed asking her questions like "How old are you?", and we've also heard several times, "Same face!".  It's been a really great experience for my students to meet another "foreigner" and for my mom to finally meet the kids I've been teaching to the past year.

Next week, we will be off to Jeju Island and Seoul for more adventures since I will be starting summer vacation.