Take Me Out to the Ball Game!

One thing I've really missed this summer is hitting up a few Cardinals baseball games, grabbing a delicious ballpark hotdog, and watching my main man Molina behind the plate.  Lucky for me, apart from soccer, baseball is Korea's second-most popular sport.  There are nine national teams in the Korean Baseball League and games are extremely cheap to attend.  I've gone to two games this summer and both have been extremely fun!

I went to my first game in June with my friend Cara.  It was 4 o'clock, we were already in Seoul and decided to take the subway over to Jamsil Sports Complex to see if there was a game since all games are played in the evenings.  We were able to get tickets for the 5:30 game, and we were asked which seats we wanted: the $10, $12, or $15.  We decided to splurge and go for the $15 seats between third base and home plate, about 12 rows from the field.  Not bad for the "pricy" tickets.  The stadium is divided into two sections: home team section and visiting section; so when you buy tickets, you choose which side you want to sit on.  We decided just to sit with the home team which was the LG Twins.  The visitors were the SK Wyverns.  All teams are owned by a major Korean corporation. 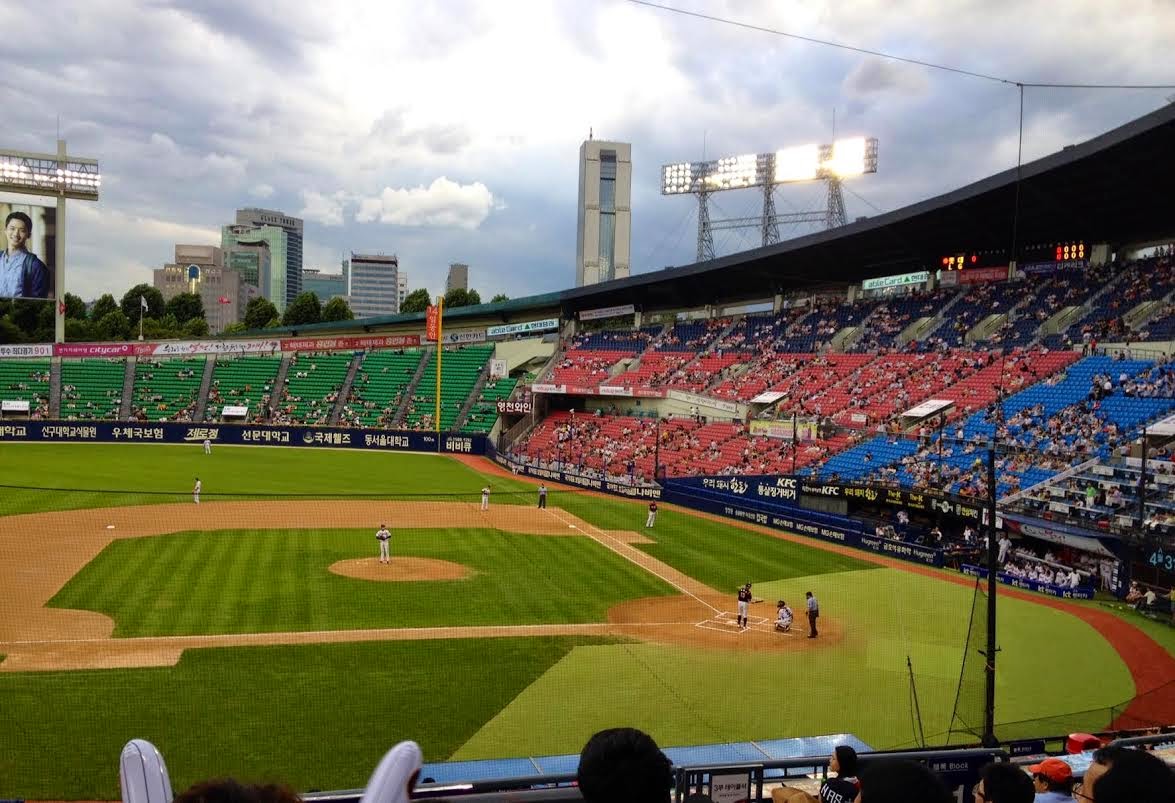 View of the field

My second game was just a couple weeks ago, and I got to spend it with the people I love most: my family!  During our time in Seoul, it was a MUST to see a game since we all love a little baseball action.  Of course we "splurged" for the same tickets too.  This time we saw LG play the Lotte Giants, which we were told are the equivalent of the NY Yankees in regards to Korean fan bases.  The Korean guy sitting next to my dad was wearing a special All-Star jersey, which eventually lead to a conversation.  We found out that this guy had obtained his Master's degree from Washington University in St. Louis in 1996!  Talk about a small world!  Unfortunately this game was rained out in the 5th inning, but we still managed to witness a homerun and my brother and I left as jersey-holding members of the Giants fan base. 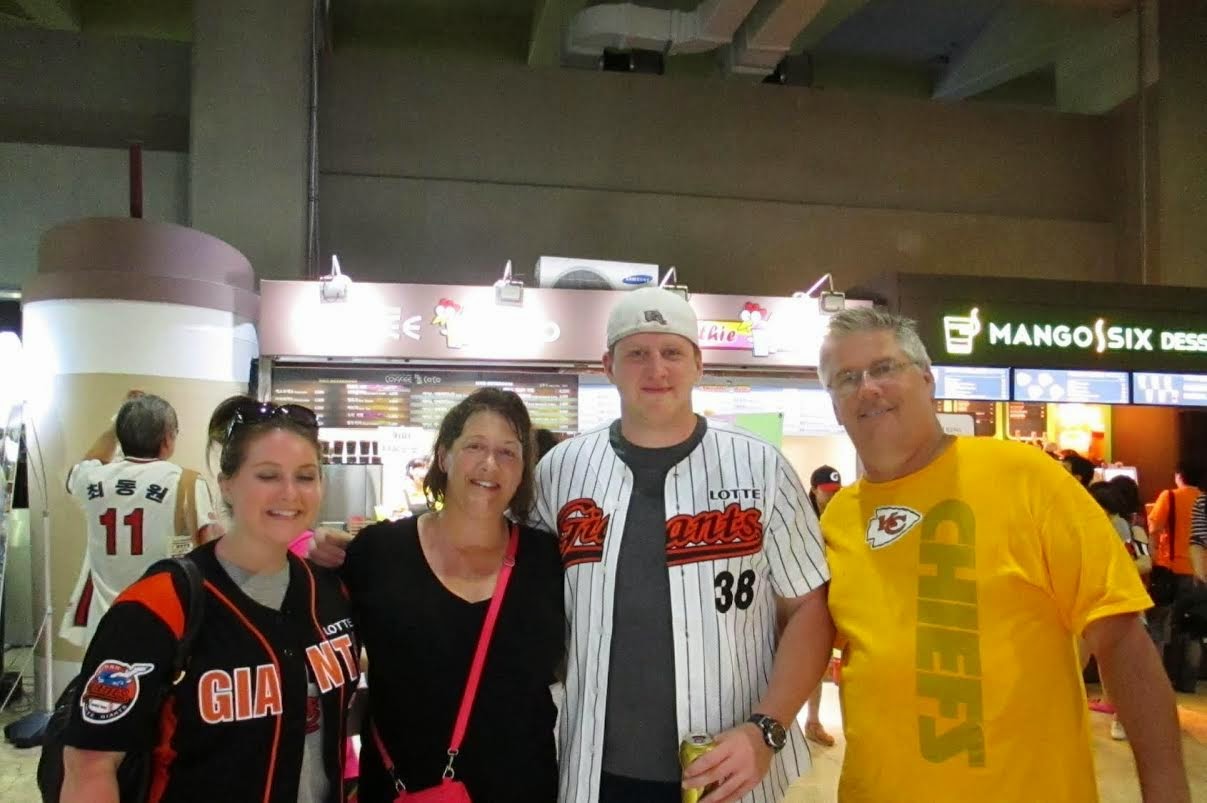 Family at the game...obviously I didn't get the memo about keeping our eyes open. 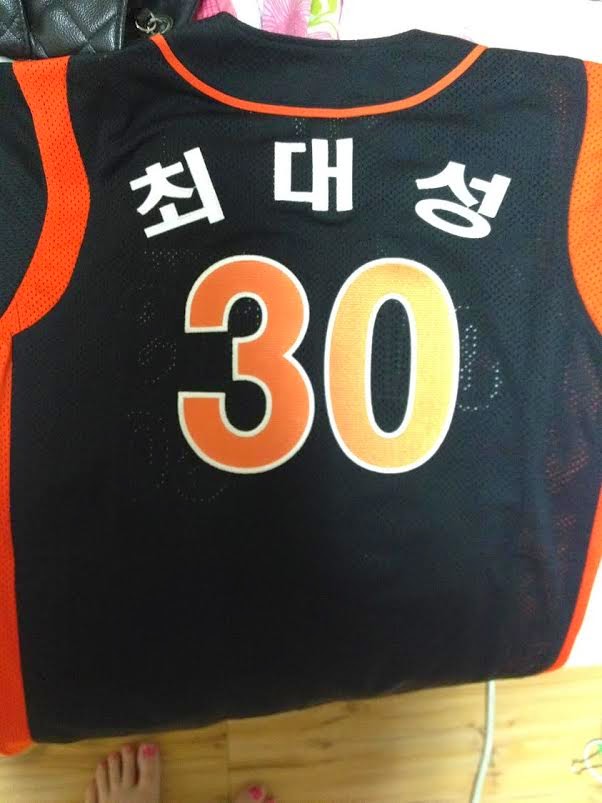 The ballpark food isn't exactly what you would be able to find at Busch Stadium, but there is still quite the selection: Burger King, KFC, Pizza Hut, Smoothie King, etc.  Concession prices weren't overly inflated either which is always a plus.  Many people decide to skip the ballpark food altogether and order delivery to the stadium.  Fried chicken delivery is always the most popular choice for Koreans, and you can bring your own food into the stadium no problem.  My brother happened to be a huge fan of the $3 Budweiser tallboys.  Yep, you heard that right...$3. 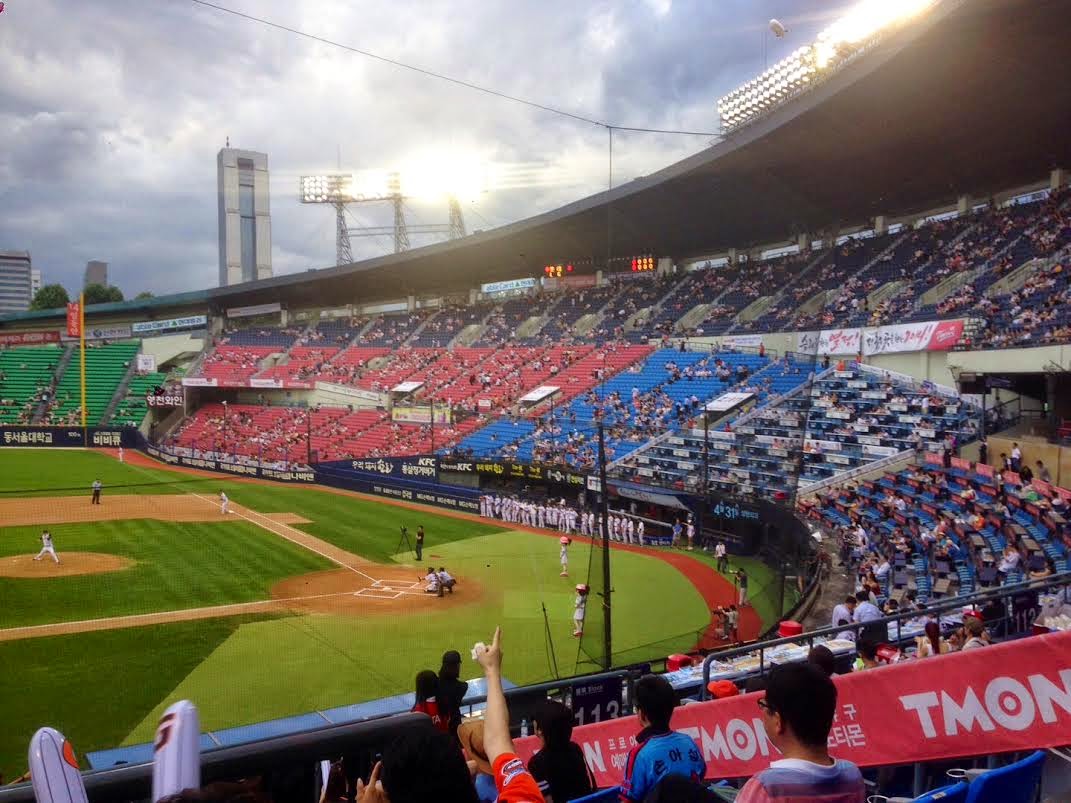 Another great view from our seats.

If you go to a Korean baseball game, don't get upset when you don't heard the familiar "Take Me Out to the Ballgame" chant.  Instead, Koreans have their own chants which are led by cheerleaders.  Many of the chants are in tune to popular English songs; my personal favorite chant being the one to the tune of Disney's "It's a Small World".

Hope you thought this post was a Grand Slam...sorry that wasn't as funny as I had hoped.  Until next time...