After being here a year, I feel as if I don't have many 'firsts' anymore, so when  I recently got the chance to attend my first Korean wedding, I was really excited.  I was invited to a coworker's son's wedding and it happened to be in Jecheon, so I decided to tag along with some fellow coworkers.  I was a little confused as to why I was invited since I didn't exactly know the couple, but I was told it is common for parents of the bride and groom to invite many people to the wedding, whether you know the couple or not.  I've heard almost all weddings take place in wedding halls, which is easy to believe considering the amount of them I've seen in Korea, but this particular wedding took place in a Christian church.

Traditionally in Korean weddings, eating almost always comes before the ceremony; so upon arriving at the wedding hall, all guests settle in a dining room or cafeteria and are served a buffet style meal. There was so much food at the wedding, which included both Western and Korean style foods;  but I quickly noticed there was no wedding cake!  I later found out that some Korean weddings have a cake, but this particular one did not.  Once done eating, we made our way upstairs to the actual ceremony.  As soon as we sat down, the bride, dressed in a beautiful white dress and veil, preceded to walk down the aisle and the ceremony officially started.  At this time, there were maybe only 30 people in the church, as most people (maybe 70 or so) were still downstairs in the cafeteria eating. During the ceremony, a few more people trickled in to watch; but, I was so confused because there were more people eating before the wedding than actual people who turned up to watch the ceremony.  I guess priorities were definitely in order... 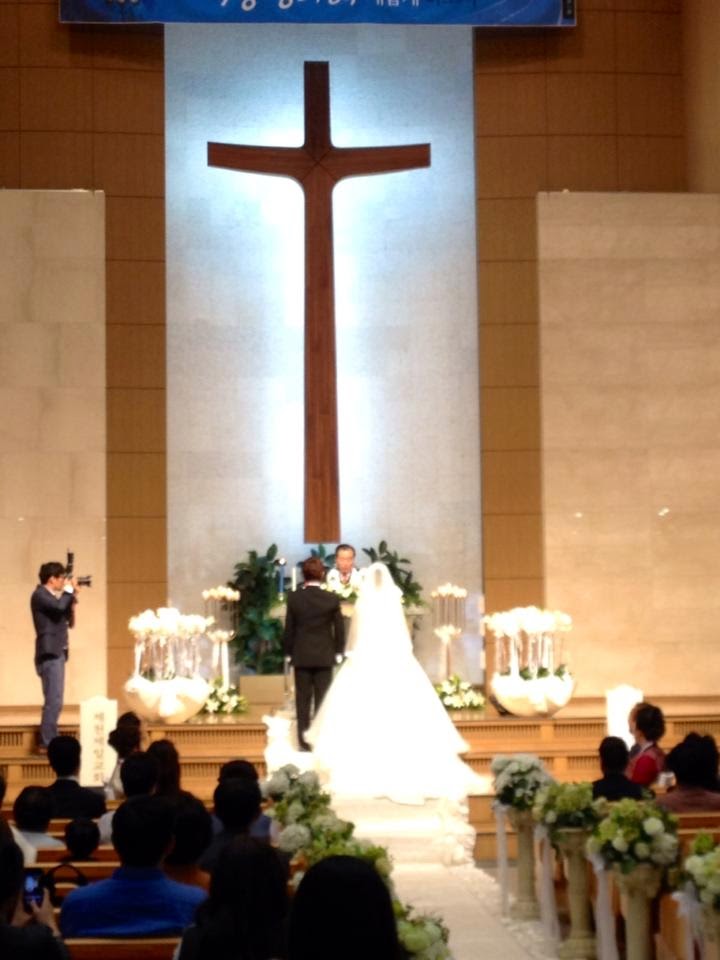 The whole ceremony was very short, taking about 25 minutes.  Since it was all spoken in Korean, I couldn't understand much, but it seemed like a normal Christian wedding; a unity candle was lit, vows exchanged, a song was sung, and (to quote Beyonce) the bride and groom both put a ring on it.  The bride and groom must have been quite nervous though because they both put their significant other's ring on the wrong hand!  At first I thought that Koreans must wear their wedding rings on the opposite hand, but then the minister pointed out their mistake and the rings were swapped.  Once the ceremony was over, the couple walked up the aisle and thanked people for coming and took a few pictures.

**Side-note** During the ceremony I was quite distracted as there was one lady whose sole purpose was to help the bride maneuver in her dress.  The lady was constantly fixing the train of the bride's gown and helping her to move up and down the altar steps.  It got annoying after awhile.

Receptions are my favorite part of weddings, because who doesn't love a good reception??? Open bar, dancing, mingling with people...what's not to love??  Well unfortunately, this wedding didn't have a reception, although I was told that the newlywed's close family and select friends do gather post-wedding to celebrate.  Since most people, including myself, did not fall into that category, we were free to leave.  The whole thing was extremely short, from the time we arrived to the time we left; it lasted maybe one hour. 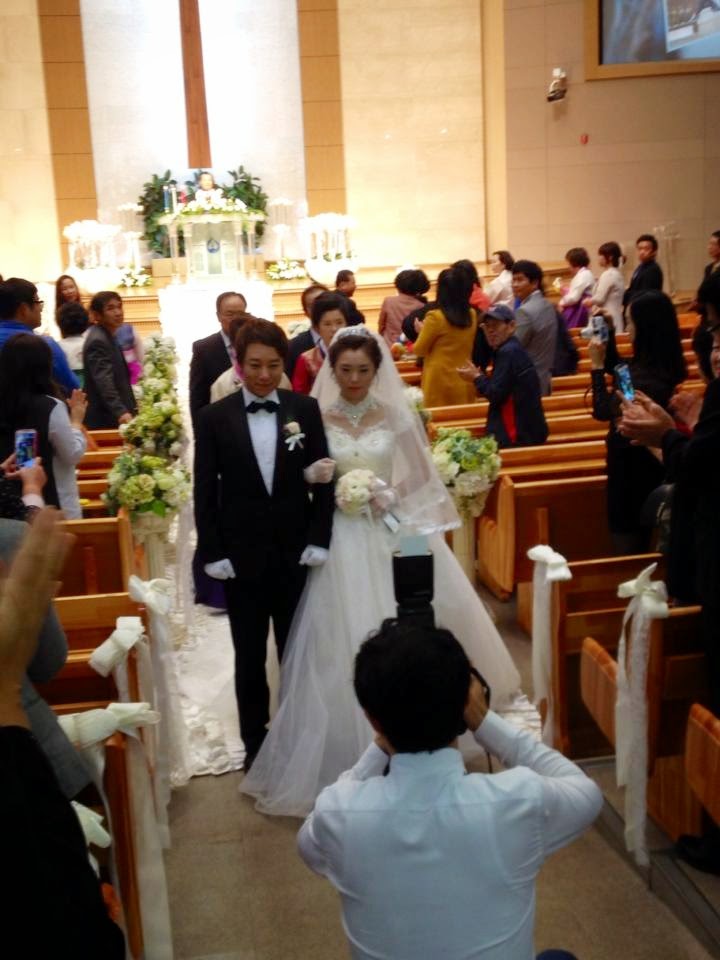 Gift-giving is customary in wedding traditions, so I asked my Korean friend if I should give around $20.  I thought that was reasonable since I didn't know the couple at all, but I soon found out that that was not appropriate.  My friend informed me that $30 is the absolute minimum one can give, but since I didn't know the couple, I did not need to give a gift.  Koreans actually don't have a gift registry, so they only receive money.  Depending on your relationship to the couple, there is a certain amount of money you are expected to give, and one must never give money in denominations of 5. For example, $45 is not acceptable; you should round up to $50.   Since I wasn't even considered an acquaintance, I was excluded from the gift-giving (I saved money so I'm not complaining).

I recently also got invited to another wedding this coming December, but it is a family member of a close friend, and it will be held in Seoul.  I am excited to compare the two and see another Korean wedding!