Never did I ever believe I would step foot into a public bath house, or jjimjilbong, as they're known in Korea; but, somehow I find myself doing what was once the unthinkable, and on a regular basis, sort of.  Korea has opened my eyes to many new experiences but going to a public bath house is not one I expected to partake in, much less enjoy.  Before I tell you how my first jjimjilbong experience came to be, I'll give you a little more information about them.

For a real jjimjilbong experience, check out this hilarious video of The Walking Dead's Steven Yeun and Conan O'Brien going to one:
https://youtu.be/k70xBg8en-4


Jimjilbongs are really popular in Korea and for good reason; for about $8, you will receive a T-shirt and shorts set, have access to a gender-segregated shower/bath area, a selection of temperature-varying sauna rooms available for use, a restaurant, a TV room, and a sleeping room.  Compared to hotels, jimjilbongs are a much cheaper alternative, as long as you don’t mind sharing the space with multiple other people. 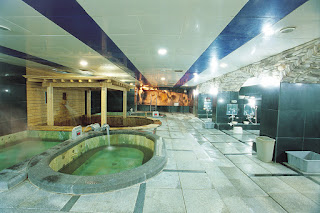 Bath/Shower Room: notice the pools on the left and showers on the right


Once checking into a jjimjilbang, you'll receive a locker/key assignment and a set of gym clothes. You'll then make your way to the locker/shower room where you can choose to take a shower or bath.  The baths are actually big pools that range in temperature; cool, warm and hot.  Sitting in the pools, you will find an older lady who is available to help you scrub the dead skin off of your body; an older man is available in the men’s shower area as well.  The pools are usually located in the center of the room, and the showers are aligned against the walls. Forgot shampoo, conditioner, a hairdryer?  No worries!  Toiletries can be bought there and hairdryers and towels are provided for you.  Keep in mind that this area is either men-only or women-only, but it's still public. 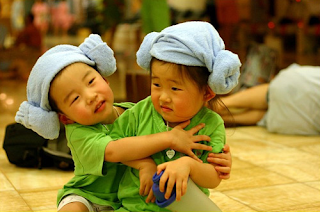 I was in for quite a shock my first time because all I saw was a sea of boobs and vaginas on females of every age (5-85).  And since I know you're secretly wondering, down under is not trimmed in any way, shape or form...not that there's anything wrong with not grooming, but considering the fact that most Americans at least do some sort of maintaining down there, I was surprised.  After showering, you can dry off, blow dry your hair (and apparently your pubes as well, as I saw many Korean women doing), and change into the gym clothes provided for you.

After the shower room, you can make your way to the public resting area which isn't gender-segregated.  The resting area is equipped with big-screen TVs, sleeping mats, pillows, massage chairs, and a restaurant/snack bar. Sauna rooms are also available; these rooms range in temperatures from about 68-105 degrees...so take your pick!  If you want to sleep, you just find a spot on the floor and grab a complimentary pillow and mat.  If you're a light sleeper, you'll probably hate jimjilbongs because it's a public area so people are moving around, talking, playing on their phones, eating, watching TV or snoring.  But, for less than $10/night, you can’t really complain.  Jimjilbongs are open 24hrs/7days a week so it's easy to see how convenient they are.  Korean singles and families alike, enjoy staying at jimjilbongs, and they are a popular choice over hotels.  And if you’re worried about cleanliness, don’t be; all of the jimjilbongs I’ve experienced have been very clean and comfortable. 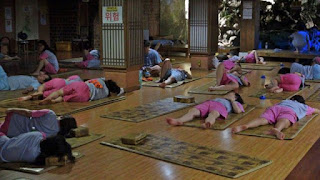 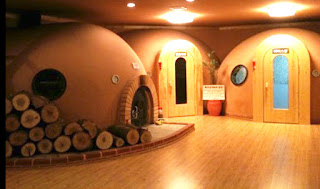 The selection of sauna rooms ranging from about 65-1105 degrees!


So how did I get exposed to a jimjilbong, especially after trying to avoid them like the plague?  Well, it most definitely wasn't by choice!  I joined a local gym about a year ago and little did I know, every gym is either attached to a jimjilbong or includes a public shower and sauna area.  After my first spinning class, I darted home in my sweaty clothes; after my second class, I wasn’t so lucky.  My fellow spinner/co-worker stopped me before I could leave the gym and asked why I didn’t shower, because apparently everyone does.  I told her some excuse about not having shampoo or soap, but she insisted I use her stuff.  So there I was, stuck and forced to strip down and shower with my co-worker, along with about 30 other women.  Being the only foreigner, I was the target of a lot of wandering eyes at first, but nowadays I’m just another sweaty body in need of a shower.  After the initial shock, embarrassment, self-consciousness and coming to terms with the fact that I shower with my co-worker multiple times a week, I have come to find jimjilbongs, dare I say, an enjoyable experience.  During the winter time, my friends and I have even went to our local jimjilbong just to warm up and enjoy a heated area for a few hours because it’s cheaper than paying for our home heating.

Anyone who ever happens to find themselves in South Korea at any point in time, I highly encourage you to spend just one night at a jimjilbong.  It’s a one-of-a-kind, bare-all experience that is a must-do.