Most Koreans love to drink, point blank.  Any reason to drink is good enough for them: work dinners, post-exams, birthdays, a stressful week, etc.  Soju is the most widely consumed alcohol in Korea; and beer is probably a close second, because mixing the two alcohols together is another popular drink in itself.  Soju is to Korea as tequila is to Mexico or vodka is to Russia.  And in a country where soju and beer are so affordable, it's no wonder that Koreans drink a lot.  A bottle of soju will only set you back about $1.50, and even though the average alcohol content is about 22%, don't underestimate it's potential to knock you off your feet!

So what is soju exactly?  Soju is a clear liquor, typically made from rice, and smells and tastes like rubbing alcohol, in my opinion.  Luckily, it is very easy to mask the taste of soju with a little mixer such as juice or soda, and some bars specialize in soju cocktails which are quite good.
It is customary to drink soju straight up and in shot form.  Traditionally, you should have someone pour your shot for you while you cup the glass with both hands.  Then, you should turn your back to your elder and drink the shot while covering both the glass and your mouth.  I learned this through the multiple school dinners I've had the forcible pleasure of drinking at; this little routine is especially important when the principal or vice-principal, or any elder, offers you a shot. 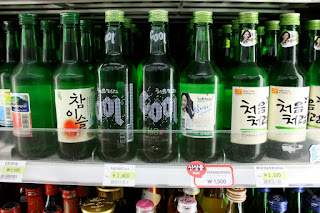 The variety of soju found at the convenience store, although they all pretty much taste the same.

Upon meeting a new group of Koreans, you can almost guarantee they will ask you if you like soju, and if you say 'yes', then expect to be asked how many bottles you are able to drink.  They will judge you based on your answer.  Many Korean men will usually say they can drink around 3-5 (12 fl. ounce-sized) bottles, but they have also had many years of practice.

So with drinking comes hangovers, right?  Well, Koreans have cures for those of course.  I have heard about many hangover cures in my time here, and here are a few worth mentioning...

1.  Ramen
Yes, that ramen; the $0.25 brick-shaped instant noodles you find at the grocery store.  Ramen is  extremely popular in Asia and is a popular convenience store snack.  I have personally witnessed a co-worker, slumped over at his desk, eating ramen at 9am because he was hungover from the school dinner the night before.

2.  "Condition" Hangover Drink
Also found at convenience stores here is a special "hangover drink".  My foreign and Korean friends alike swear by its magical hangover-curing powers.  It's called Condition and it's meant to be consumed before drinking, but it is also effective if consumed after the damage is already done.  It is made from a combination of vitamins, amino acids, and medicinal properties from plant roots, leaves and seeds. 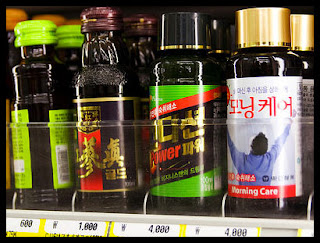 Who knew a tiny little bottle could pack so much punch?

3.  Hangover Soup (aka Hae-jong-gook)
There are several variations of Korean hangover soup but my personal favorite, that I actually enjoy eating sober, is haejonggook.  Haejonggook literally means "stew to cure a hangover".  It's comprised of beef broth, bean sprouts, scallions, cabbage and chunks of congealed ox blood.  Most people would run at the words "congealed ox blood" but it's actually my favorite part of the soup! Haejongguk can be found at various restaurants, and a bowl will cost you about $6. 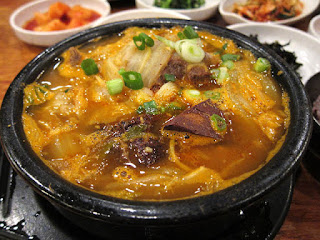 This article is not to glorify consuming alcohol, but drinking, especially soju, is a really large part of Korean culture, so I felt that the topic deserved it's own recognition.  I believe soju will eventually make its way onto American shelves, and when it does, I encourage you to try it once; just remember to accept it with both hands and don't pour your own shot!