Wow, what a whirlwind month this has been!  I finished up another semester teaching, traveled Vietnam for a week, and came back Stateside for two weeks for the first time in a year and a half.  I don't think I've ever been so exhausted in my life, but I have enjoyed every minute of my vacation time.

First let's talk Vietnam.  Vietnam had been on my travel bucket list for quite some time, so I was really excited to not only be able to go there for a week, but I was able to go with my friends as well since our vacation time happened to coincide.  We wanted to pack in as much as possible into our single week there, so our itinerary included three different cities: Hanoi (capital city), Danang and Hoi An.  We decided it was best to start in Hanoi and work our way south.  Hanoi was...busy, to put it simply.  Out of all the places I've been, Hanoi had the absolute worst traffic I've ever seen.  I don't even know if it was the traffic that was bad, or if it was the fact that there were no traffic laws.  My friends and I even began to joke that in Vietnam green lights mean go, yellow lights mean go and red lights also mean go.  Crossing the street was literally an endangerment to our lives.  Other than the awful street nonsense, I also noticed a lot of French influence in Hanoi, especially in the city's colonial-style architecture. 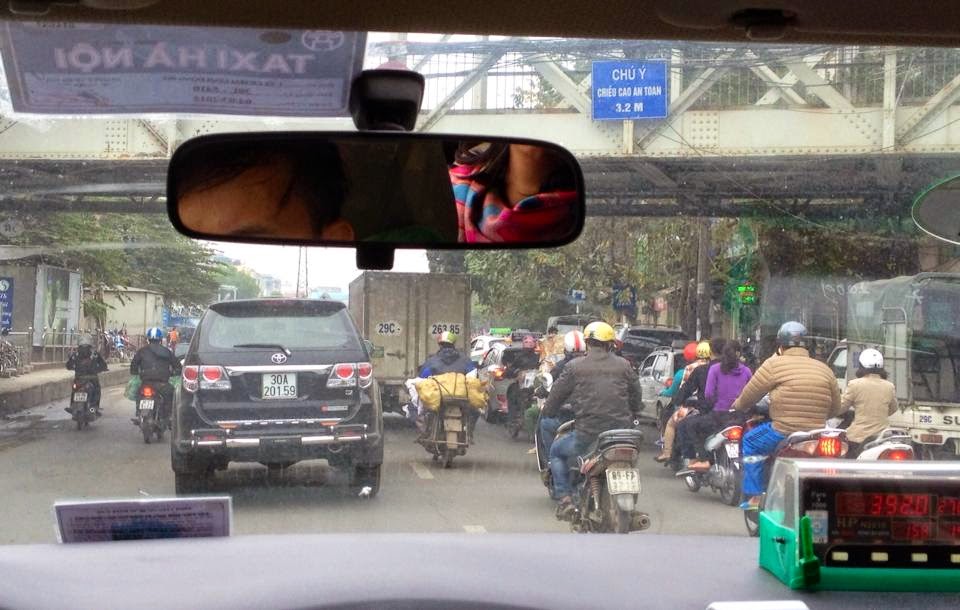 Just a glimpse of the traffic...the picture doesn't quite do it justice. 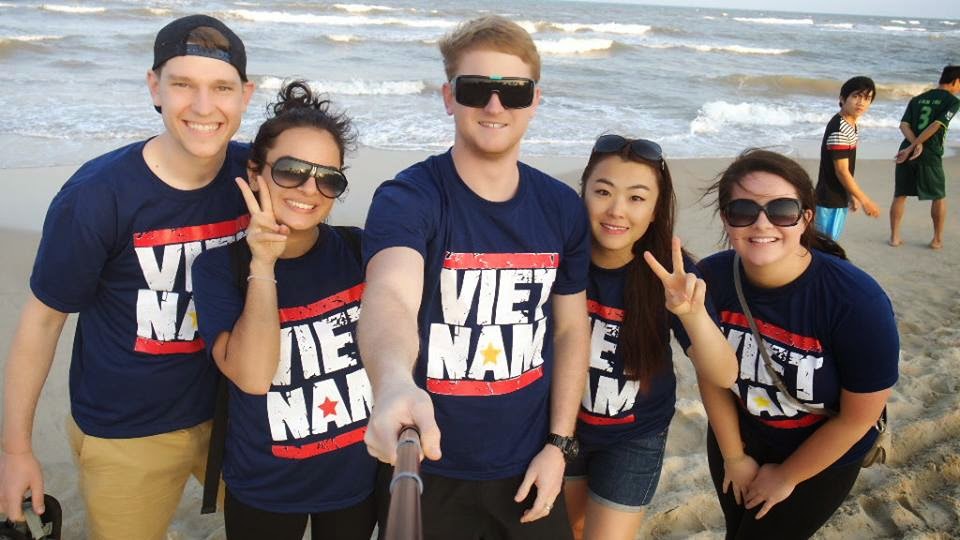 The Vietnam crew: Casey, Cara, Chris, JaeHee and Me


While in Hanoi, we took a 2-day/1-night cruise into Ha Long Bay.  The bay consists of about 1,500 small islands.  During our cruise we were able to do many activities, including: kayaking, exploring one of the larger islands that was home to wild monkeys, tour a pearl farm, and join a Vietnamese cooking lesson.  But possibly my favorite part of the cruise was being randomly grouped with all Koreans on our boat for the entirety of our Ha Long Bay cruise...it felt so familiar! 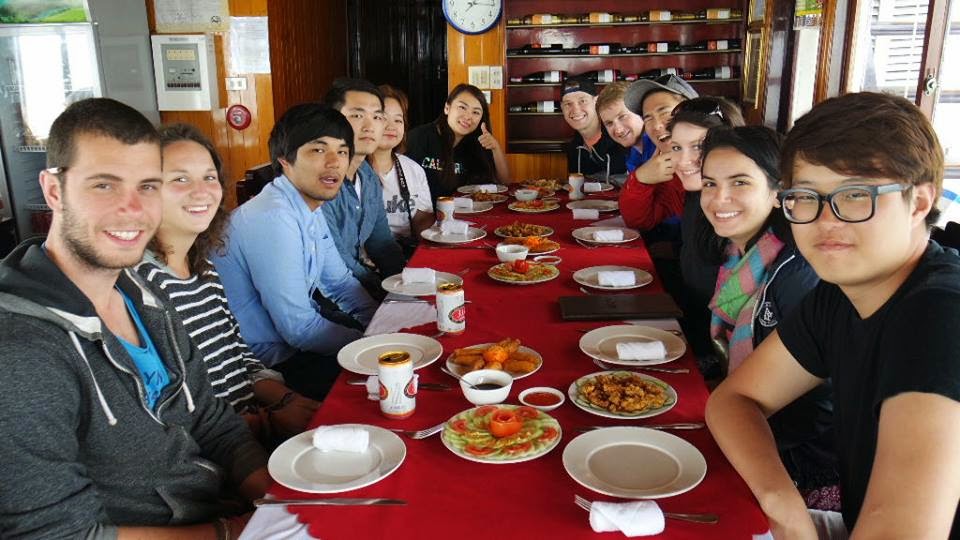 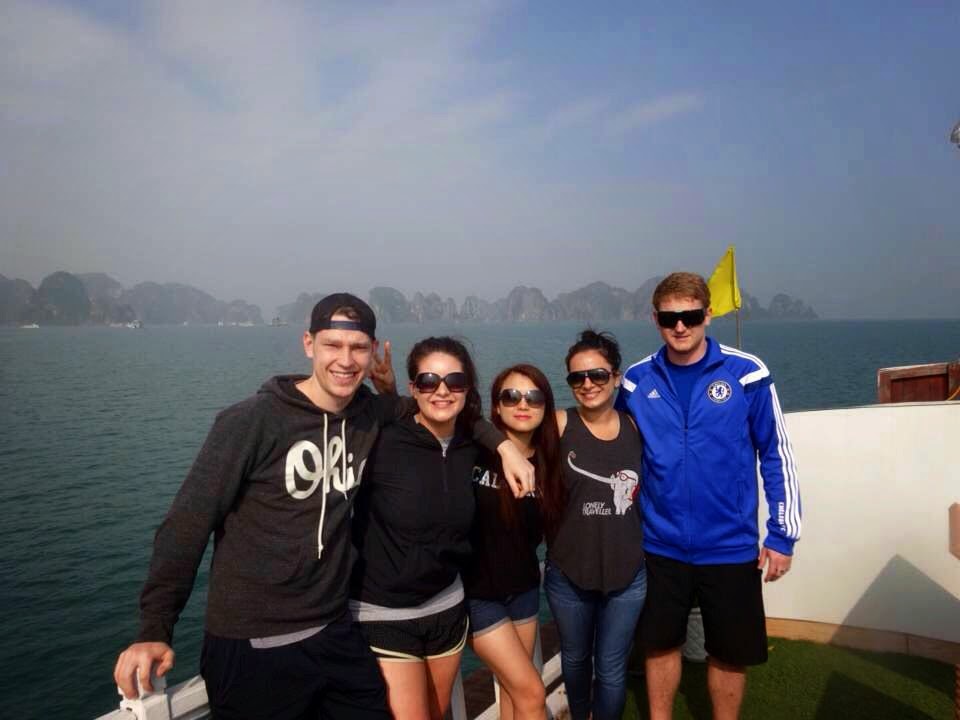 Enjoying the views of Halong Bay while relaxing on our cruise boat. 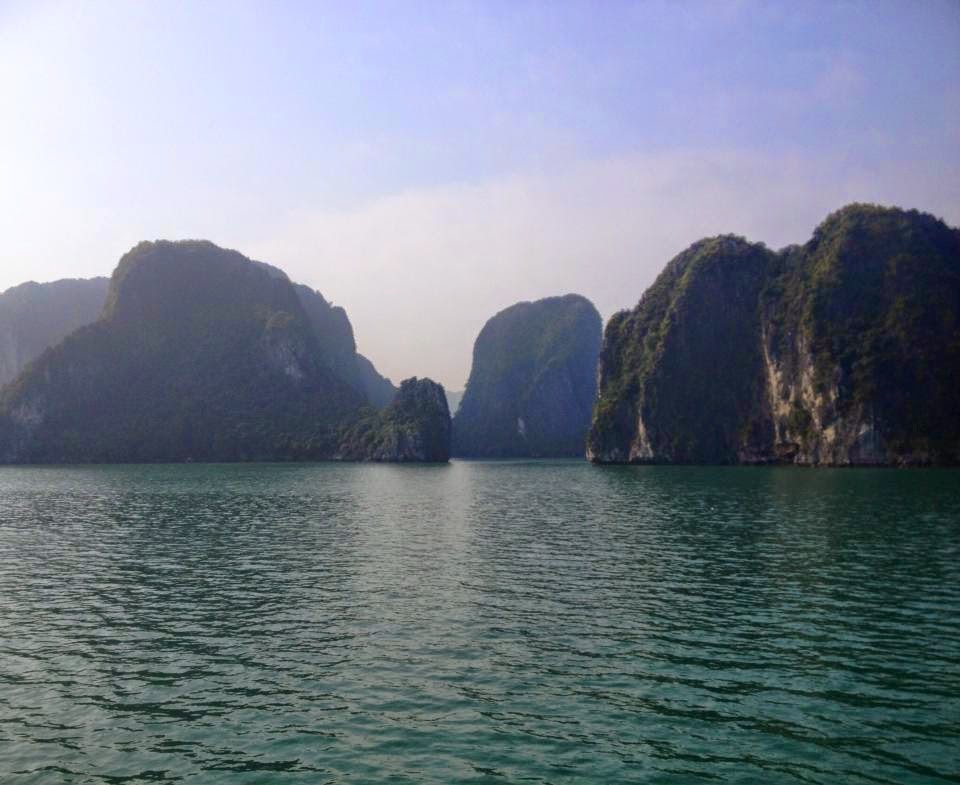 Halong Bay is filled with thousands of tiny islands like these. 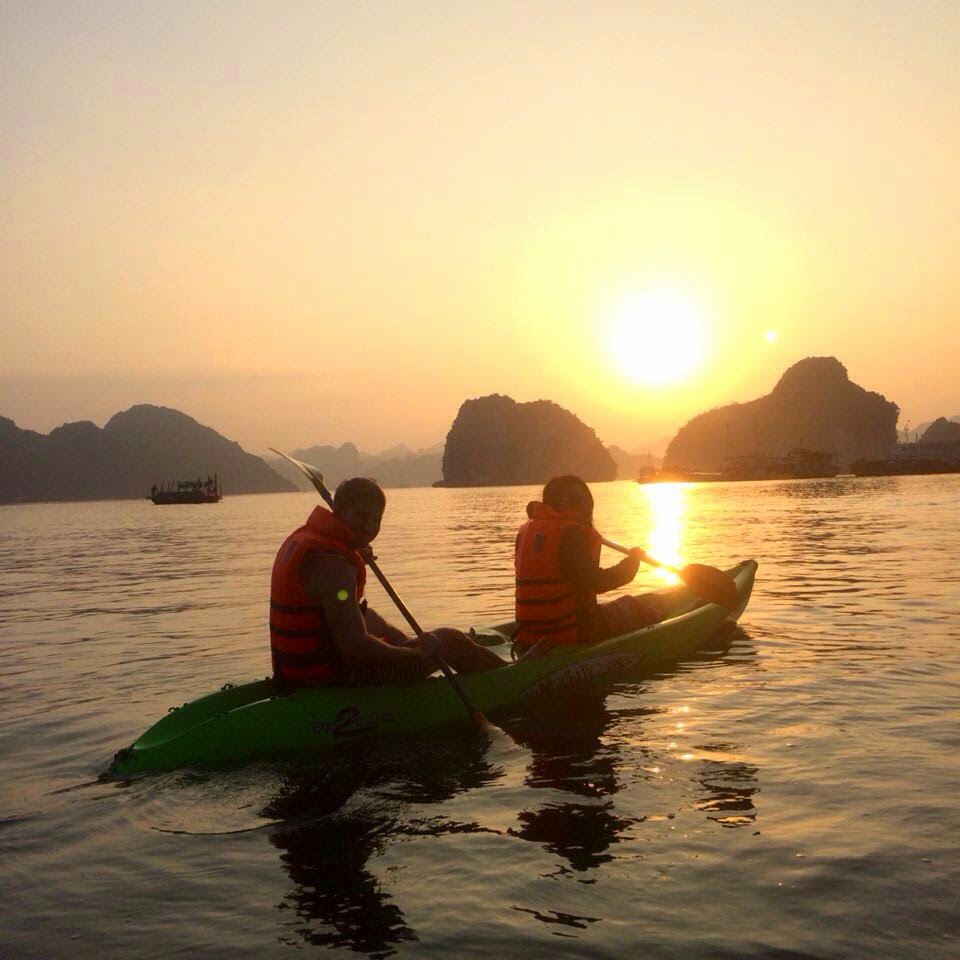 Kayaking in Halong Bay at sunset.


After sightseeing in Hanoi for a few days, we took a 45-minute flight to Danang which is situated in the middle of the country on the coast.  Danang was a much slower pace than Hanoi and we were able to relax on the beach and walk around the city.  I really enjoyed the fact that Vietnam, and especially Danang, had much fewer tourists than the previous Southeast Asian countries I have visited. 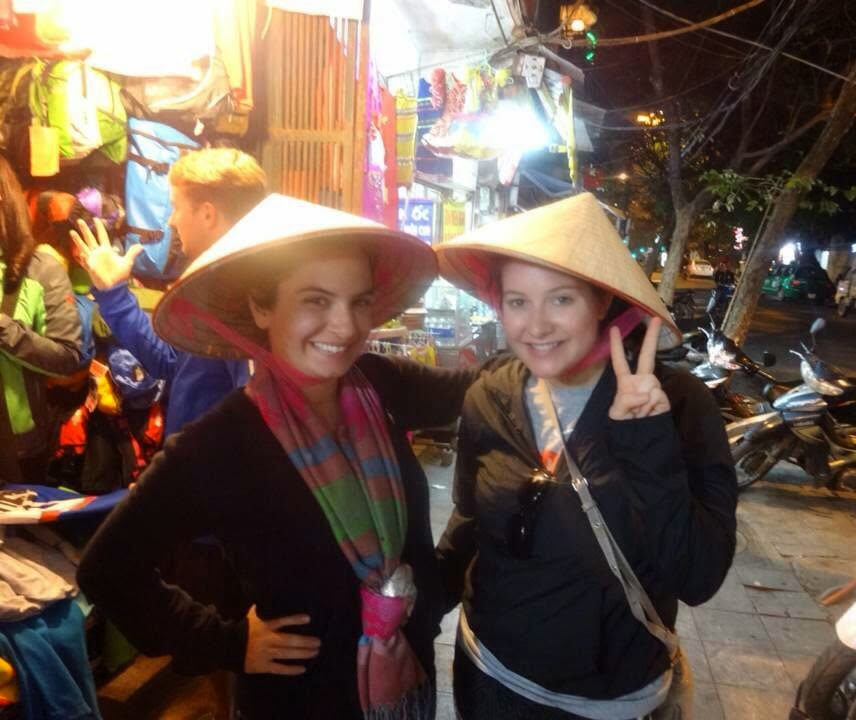 We spent our last couple days in Hoi An which was about a 40 minute taxi ride from Danang.  Hoi An was my favorite stop along our journey.  Hoi An was a quiet town, and since it was smaller in size, we were able to rent motorbikes from our hotel and drive them wherever we went; our favorite spot being our hotel's private beach.  Hoi An also had a large outdoor market area where you could buy fresh fruit (many kinds I had never even seen or heard of), street food, custom clothes/shoes shops, souvenirs, or take boat rides along the river.  It was a very quaint and charming town that was the perfect end to our week. 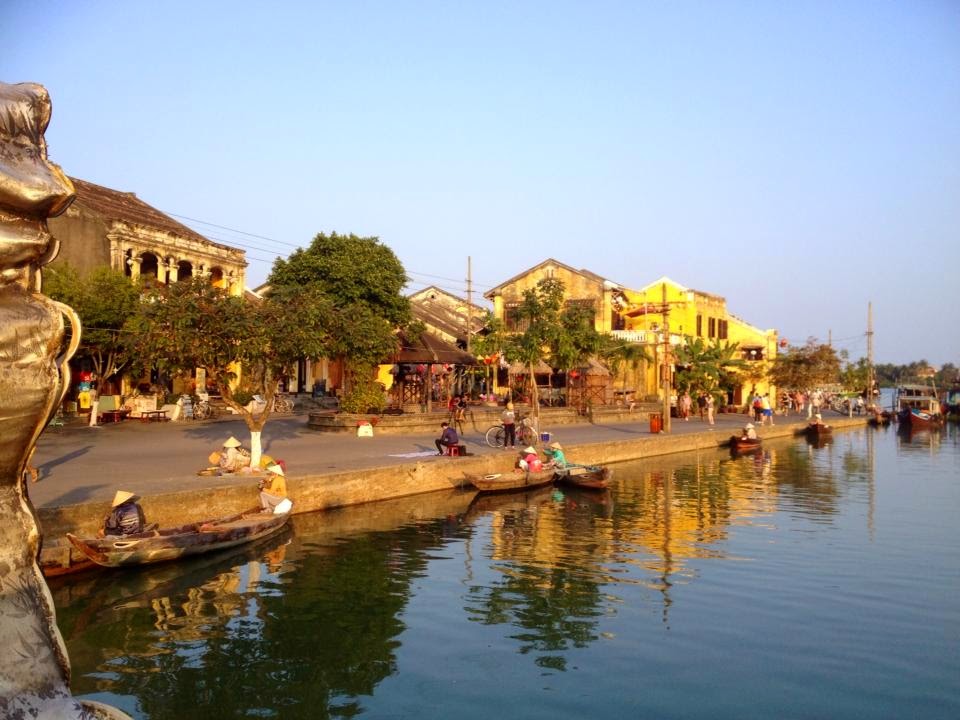 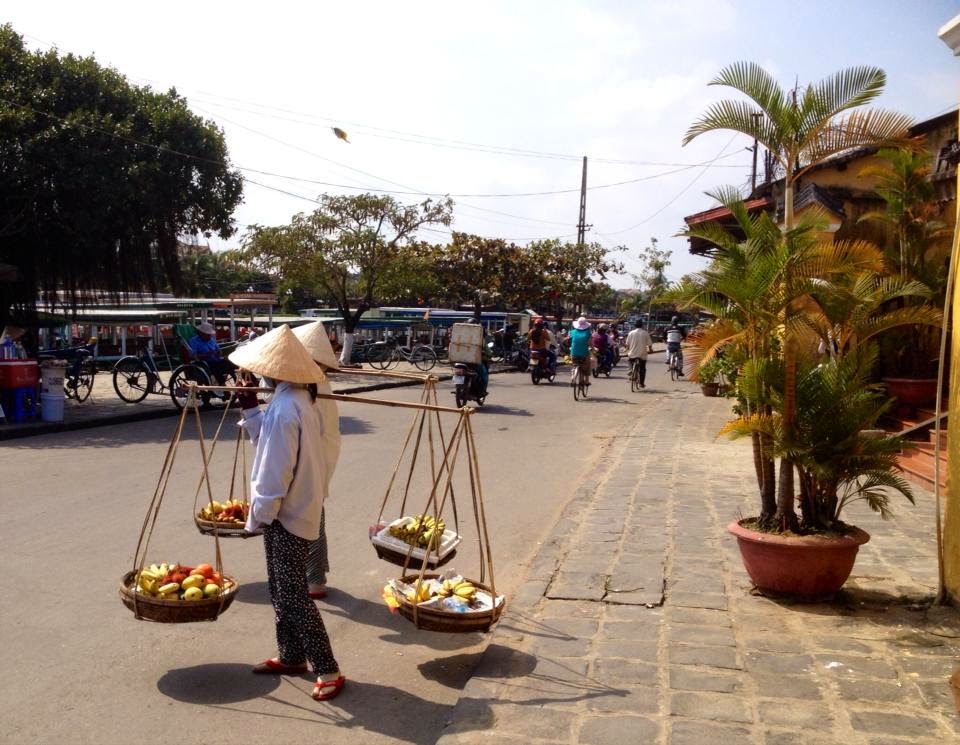 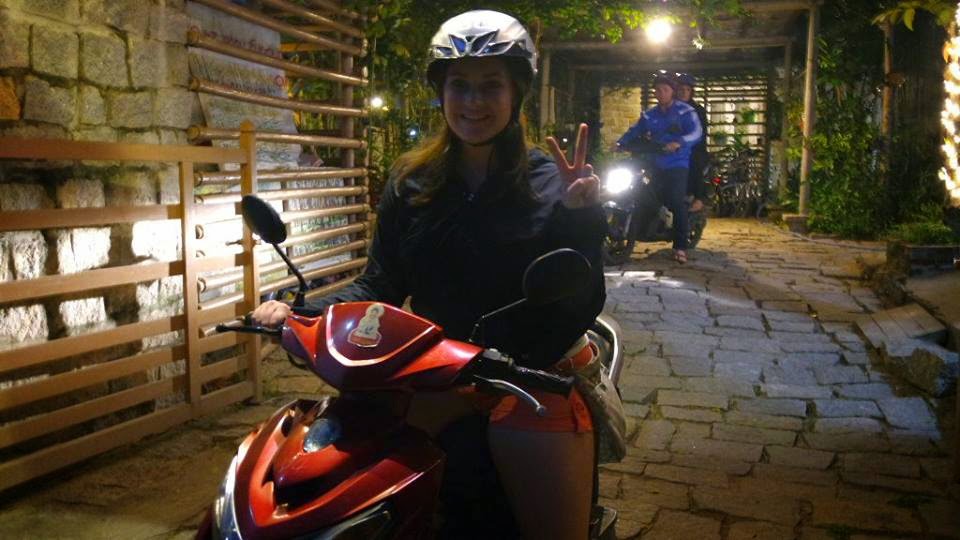 I almost drove into a lake, but no one needs to know that.

Food was also a big part of our trip to Vietnam.  In Hanoi, we stuffed ourselves with Pho, a soupy noodle-based dish accompanied by meat, green onions, and a hint of lime juice.  We also ate a fair share of fried spring rolls, which are also a Vietnamese staple.  The Vietnamese also make French-style baguette sandwiches, which are not complete without liver pate (chopped liver that is minced into a paste); don't knock it til you try it!  The food in Vietnam was absolutely amazing, but witnessing the local restaurants wash their dishes was less than wonderful.  We saw many places lay dishes out on the sidewalk, pour a little soap on them and then spray them off with a garden hose. Who needs a sink, right? 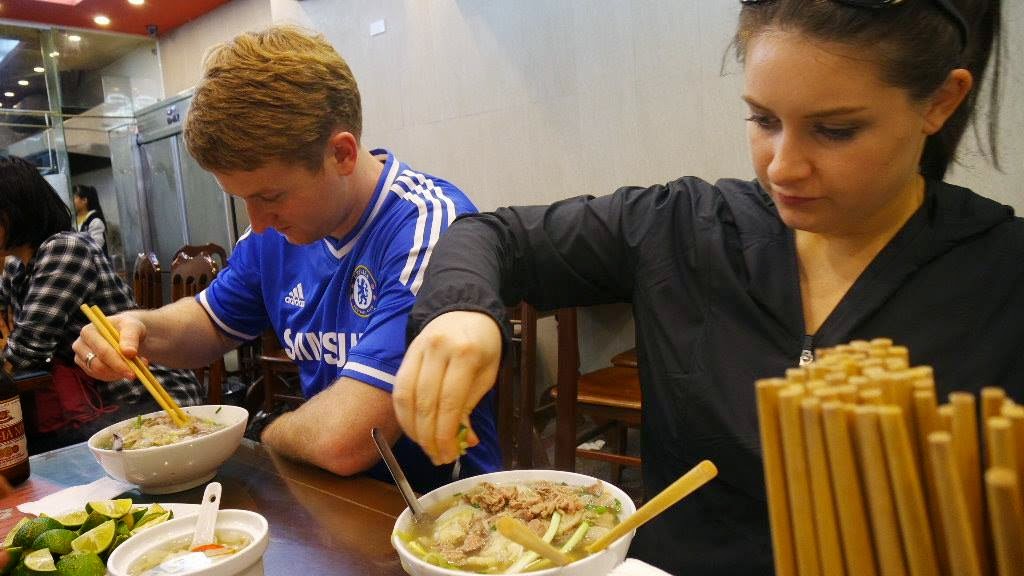 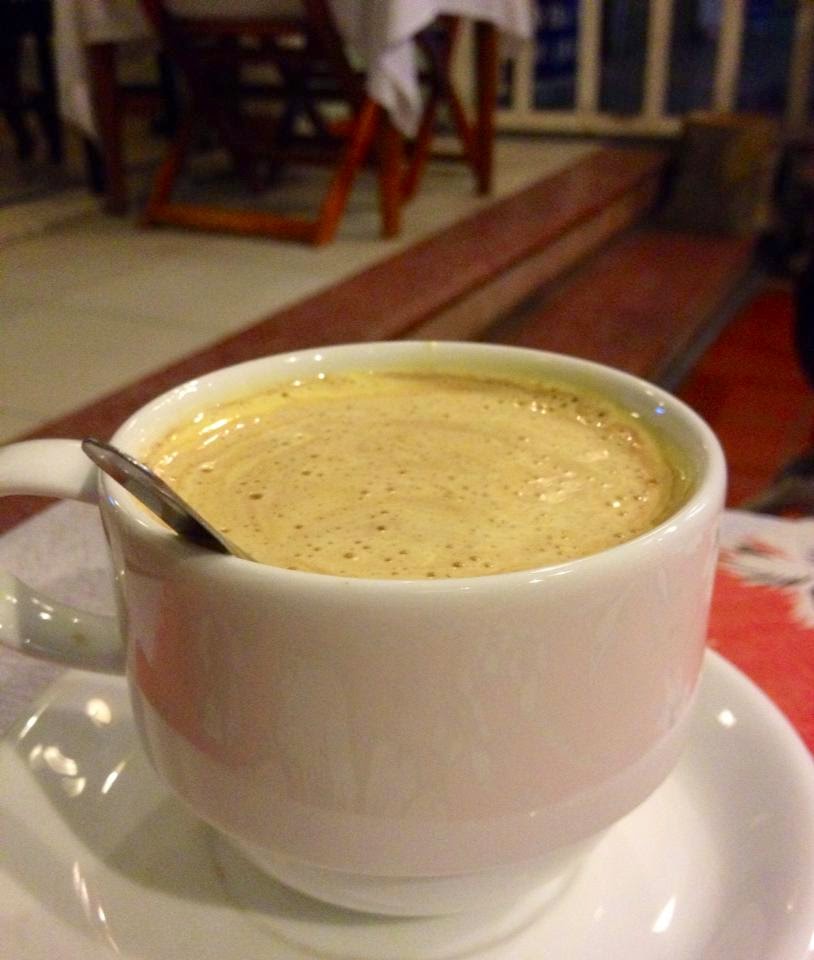 Coffee is very popular in Vietnam.  We tried a special kind that was mixed with egg.

I would've loved to have been able to stay in Vietnam longer, but I had already made plans to go somewhere else...MO!  More on that trip next time!