I was finally able to check something off my bucket list that I've wanted to accomplish ever since I came to Asia: SOLO TRAVEL!  I know it sounds scary and dangerous, but after doing lots of research and talking to multiple friends who had done it, I felt prepared to finally do it.  In general, Southeast Asia is considered really safe, but I chose to go to Malaysia and Singapore alone because they are considered the safest of the safe and English is widely spoken as a second language in both countries.

Malaysia is different from the other Southeast Asian countries I've visited because it is both multi-ethnic and multi-cultural.  Many Asian countries, and especially Korea, are basically homogenous in terms of ethnicity and culture.  As an American, who comes from the world's "melting pot", it's very strange to live and visit places where everyone is virtually the same.  There's not many non-Koreans in Korea, or non-Vietnamese people in Vietnam, whereas in Malaysia it was nice to finally see more diversity, since Malaysia is home to not only natives, but to many Chinese and Indian people as well.  This is why English is so widely spoken in Malaysia; it's a common language for everyone (lucky for me!). 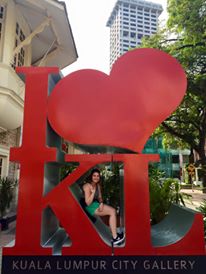 The first stop on my solo-adventure was Malaysia; Kuala Lumpur (KL) to be exact, which is the capital city.  KL's most famous landmark is the Petronas Twin Towers which stand 1,500 feet tall and house the Petronas oil company along with various other businesses and a mall.  Visitors can make their way to the skybridge, a bridge linking the two towers on the 42nd floor, and also go to the observation deck on the 86th floor. 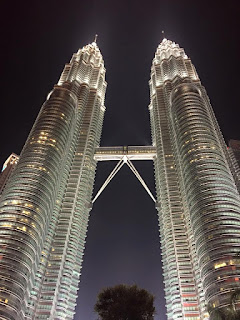 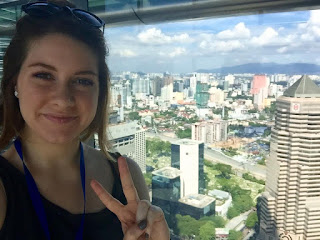 View from the top. 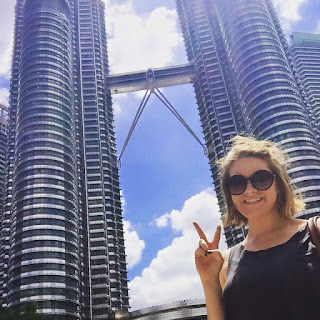 Since Kuala Lumpur is basically just another city (all cities are fairly similar, right?), I wanted to take a day trip and explore some of Malaysia's countryside.  I decided to sign up for a small group tour to see the Cameron Highlands, about 4 hours away by car from KL, which is famous for its tea plantations...and I love tea!  The BOH Tea Centre has been making various kinds of tea on sight since 1929.  I got to sample a couple while I was there...the fruit flavored teas, like passionfruit, were awesome!  One of my favorite things about Southeast Asia is the abundance of fresh, local fruit that's widely available; there's so many kinds of fruit that you don't even get to see, much less try, in the western part of the world.  For example: jackfruit, durian, dragonfruit, mangosteen (my personal fav!), etc. 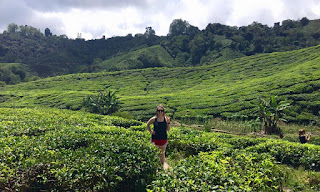 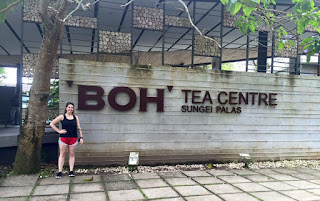 On the way to the Cameron Highlands, our tour guide stopped at the Lata Iskandar waterfall.  It was a nice break considering my group had been in the car for about 3 hours already and we were on the curviest road I have ever been on (good thing I don't get car sick!). 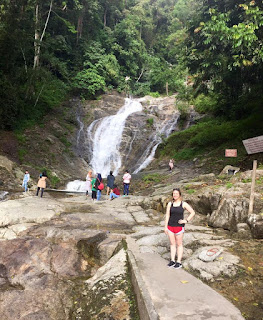 Another popular tourist destination in KL is Batu Caves, which is a limestone cave that houses one of the most popular Hindu shrines outside of India.  Malaysia is a Muslim country, but Hinduism is also very prominent because of Malaysia's large Indian community.  Batu caves is marked with a giant gold statue of Lord Murugan, the Hindu God of War.  Next to the statue are 272 steps which lead you to the cave entrance where you can see a Hindu shrine and dozens of wild monkeys waiting to steal food from tourists. 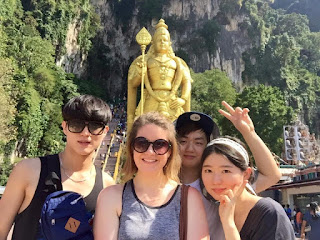 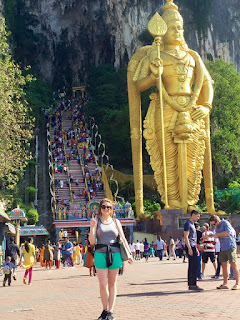 I traveled to Batu Caves with a Korean girl from my hostel and 2 Korean guys I had met the previous day at the Petronas Towers. 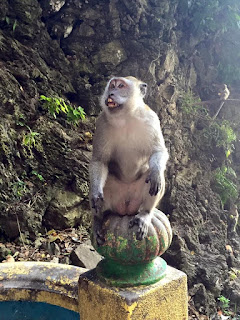 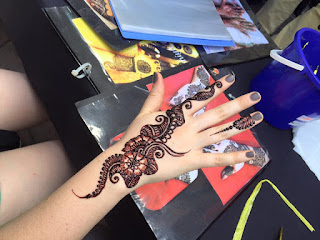 Getting a Henna tattoo 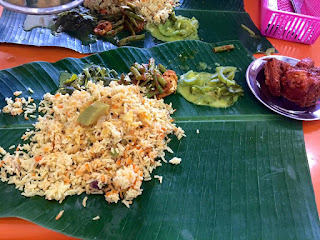 First time eating Indian food!  Indian food is served on a banana leaf and is traditionally eaten with your [clean?] hands...no utensils!  I ate veggie fried rice with fried chicken and some side dishes. 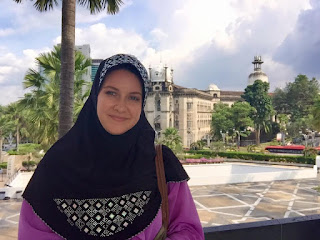 This is at the Malaysian National Mosque.  Visitors are allowed only during certain hours, and hijabs and robes are provided and must be worn in order to enter the premises.

Another one of my favorite reasons for visiting Southeast Asia is because of the abundance of local marketplaces that sell cheap souvenirs, handmade goods, and lots of street food to graze on while you shop.  Central Market is a famous indoor/outdoor marketplace in KL that has been in operation since 1888. 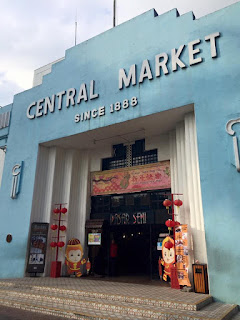 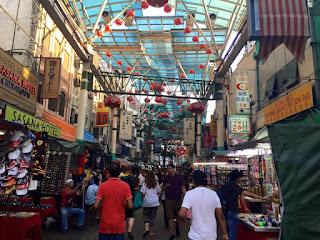 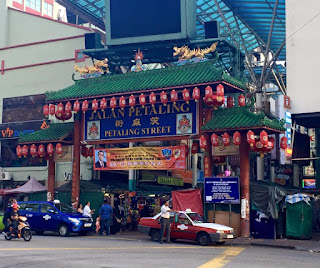 Petaling Street is another famous market in KL and is located in the heart of the Chinatown neighborhood.  Petaling Street is home to thousands of vendors who sell brand-name knockoff goods such as Beats electronics, Louis Vuitton/Prada/Coach bags, RayBan sunglasses, Chanel makeup and perfume, etc.  If you want to buy something at markets like this, it's important to have decent bartering skills; never take the first offer the vendors give you! 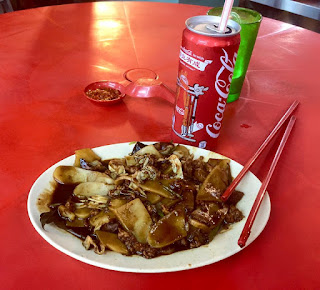 Chinese food I ate on Petaling Street in Chinatown.  Some kind of fried noodles with pork and a good 'ole coca-cola.

Speaking of food, if you want to do any kind of travel, you really need to be open to trying new food, especially local cuisine.  Luckily, I have no problem with this, and I will seriously try anything once!  In Malaysia, most restaurants only served Indian and Chinese dishes (and no, they do not have crab rangoon or orange chicken...this is not American Chinese). 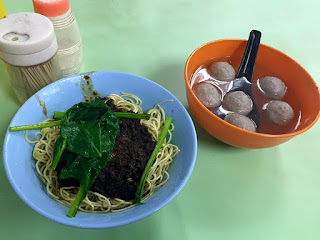 This restaurant was recommended to me by my hostel employees.  I'm not sure what the name is, but it was slightly cooked/crunchy noodles with spinach covered in a pork/tomato sauce, with a side of pork ball soup.  It wasn't bad! 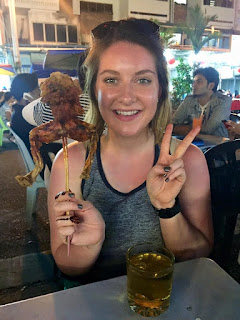 I also had the chance to try frog!  I bought this from a street vendor, and yes that is a whole frog (minus the head) grilled to a crispy consistency.  It honestly tasted like chewy chicken!  I would definitely eat it again!

In total, I spent 4 days in Malaysia.  I think Kuala Lumpur was definitely a good place to solo travel for the first time because it was really easy to get around the city, I never felt in danger, and English was widely used.  Malaysia was just the beginning though...